Paws: Gabby Gets It Together - by Nathan Fairbairn 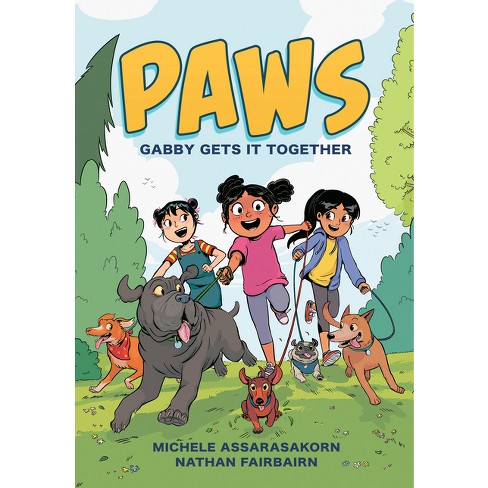 Best friends Gabby, Priya, and Mindy create a dog walking business, and quickly learn that running a business is no walk in the park.

Perfect for fans of Raina Telgemeier, Kayla Miller, and Victoria Jamieson, this funny and heartwarming graphic novel series is the Baby-Sitters Club for pets! PAWS follows a group of girls with a love of animals but an inability to have any of their own pets who start a dog-walking service. Meet best friends Gabby Jordan, Priya Gupta, and Mindy Kim. They're different in just about every way--personalities, hobbies, family, and more--but they have a few important things in common: they're all in the same class, they absolutely love animals, and for reasons that are as varied as the trio themselves none of them can actually have any pets. Unable to resist the adorable temptation any longer, the girls decide to come up with a way to finally get their hands on some furry friends. And, as luck would have it, it seems like their neighborhood is in need of some afterschool dog-walkers. So, just like that, PAWS is born! But it turns out that running a business is harder than it looks, especially with three co-owners who are such different people. The girls soon argue about everything, from how to prioritize their commitments to the best way to keep their doggy clients happy. And when their fighting ultimately leads to a doggo crisis, will it tear their business and friendship apart or will they be able to get it together to save the day?

What's a bigger, tougher balance of fun and responsibility than animals? Friends, maybe. And I was really rooting for the three girls from PAWS as they struggled to navigate both. I liked this book a lot! --Dana Simpson, New York Times bestselling creator of the Phoebe and Her Unicorn series I love this story. Funny, aspirational, and heartfelt, I was hooked from page one and enjoyed every wonderfully illustrated panel!--Kris Pearn, director and executive producer of The Willoughbys "A really beautiful and engaging story. The best thing I can say about PAWS is that my daughter likes it better than anything I've ever done, and I'm not arguing the point." --Karl Kerschl, Eisner award-winning creator

Nathan Fairbairn is a New York Times bestselling and Eisner-nominated creator, who has worked as a colorist for such iconic characters as Spider-Man, Batman, Wonder Woman, and Scott Pilgrim. He's also co-creator, writer, and colorist of the graphic novel Lake of Fire. He started writing PAWS, his middie grade debut, as a way to share his passion for comics and storytelling with his daughter. Nathan lives with his family in Vancouver. You can follow him on Twitter and Instagram (@NathanFairbairn) and see more of his work at nathanfairbairn.com. Michele Assarasakorn (also known as MSASSYK) is colorist who worked on comic series such as Eisner-nominated Isola, Gotham Academy, and The Magnificent Ms. Marvel. Originally from Bangkok, Thailand, Michele now calls Vancouver home but also likes to travel the world working remotely as an artist. PAWS marks her debut as an illustrator. You can follow her on Twitter and Instagram (@Msassyk) and see more of her work at msassyk.com.
If the item details above aren’t accurate or complete, we want to know about it.

A Land of Books - by Duncan Tonatiuh (Hardcover)

The Tryout: A Graphic Novel - by Christina Soontornvat

Broke Millennial : Stop Scraping by and Get Your Financial Life Together (Paperback) (Erin Lowry)

5 out of 5 stars
Would recommend
Molly - 8 months ago
Great middle grade book for any animal loving kid!
1 guest found this review helpful. Did you?