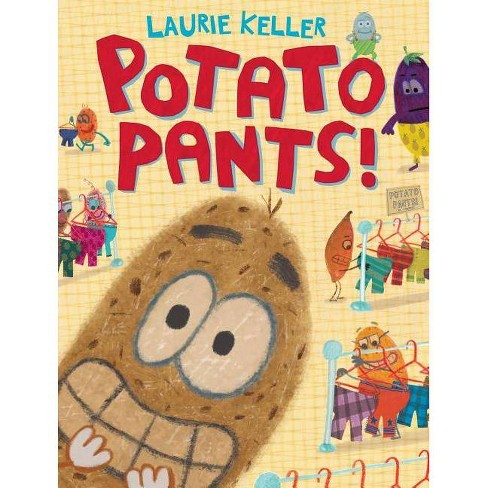 A potato and his eggplant nemesis struggle to find the perfect pair of pants in this hilarious, heartwarming tale of forgiveness by bestselling author-illustrator Keller. Full color.

A potato and his eggplant nemesis struggle to find the perfect pants in this hilarious, heartwarming tale of forgiveness by bestselling Geisel-Award winning creator Laurie Keller.

Potato is excited because today--for one day only-- Lance Vance's Fancy Pants Store is selling . . .POTATO PANTS! Potato rushes over early, but just as he's about to walk in, something makes him stop. What could it be? Find out in this one-of-a-kind story about misunderstandings and forgiveness, and--of course--Potato Pants! A Christy Ottaviano Book This title has Common Core connections.

A manic tale that's going to be very hard to read without inducing "peels" of laughter . . . Keller constructs an alliteration-rich narrative using plenty of exclamation points and big type in multiple colors to crank the volume up even further. It's potato pandemonium, any way you slice it. --Booklist, starred review

The story by Keller, buoyed by her kinetic mixed-media compositions (including potato stamps), blends humor and a theme of forgiveness.--Publishers Weekly

Laurie Keller is the acclaimed author-illustrator of Do Unto Otters, Arnie, the Doughnut, The Scrambled States of America, and Open Wide: Tooth School Inside, among numerous others. She grew up in Muskegon, Michigan, and always loved to draw, paint and write stories. She earned a B.F.A. at Kendall College of Art and Design, then worked at Hallmark as a greeting card illustrator for seven-and-a-half years, until one night she got an idea for a children's book. She quit her job, moved to New York City, and soon had published her first book. She loved living in New York, but she has now returned to her home state, where she lives in a little cottage in the woods on the shore of Lake Michigan.
If the item details above aren’t accurate or complete, we want to know about it.

Wake Me Up in 20 Coconuts! - by Laurie Keller (Hardcover)

Mihi Ever After: A Giant Problem - by Tae Keller (Hardcover)

Mihi Ever After - by Tae Keller

One Two Three - by Laurie Frankel

5 out of 5 stars
Would recommend
Lori - 8 months ago
Love, love, love this book. It’s a great and silly read aloud to kids. Adding different voices to the characters only enhances the story more. I’m an elementary school librarian and I had the students participate in some selections. A huge thumbs up!
Did you find this review helpful?

5 out of 5 stars
Pennypinchin4disney - 2 years ago
Adorable and fun to read.
1 guest found this review helpful. Did you?