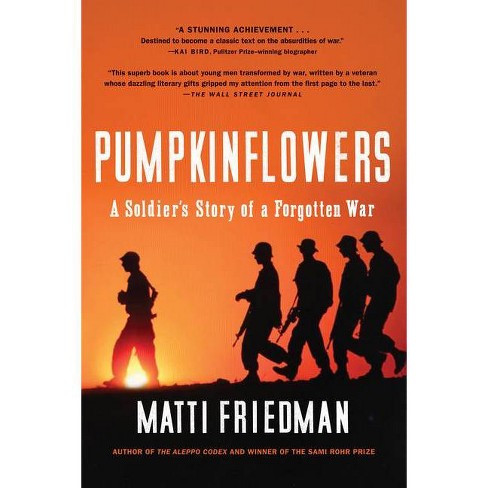 $7.99
MSRP$16.95
undefined out of 5 stars with 0 reviews
be the first!be the first! ratings
Help us improve this page

Award-winning writer Matti Friedman re-creates the experience of a band of Israeli soldiers charged with holding a remote outpost in Lebanon during an unnamed war that foreshadowed the conflicts in Afghanistan, Iraq, and elsewhere.

"A book about young men transformed by war, written by a veteran whose dazzling literary gifts gripped my attention from the first page to the last." --The Wall Street Journal

"Friedman's sober and striking new memoir . . . [is] on a par with Tim O'Brien's The Things They Carried -- its Israeli analog." --The New York Times Book Review It was just one small hilltop in a small, unnamed war in the late 1990s, but it would send out ripples that are still felt worldwide today. The hill, in Lebanon, was called the Pumpkin; flowers was the military code word for "casualties." Award-winning writer Matti Friedman re-creates the harrowing experience of a band of young Israeli soldiers charged with holding this remote outpost, a task that would change them forever, wound the country in ways large and small, and foreshadow the unwinnable conflicts the United States would soon confront in Afghanistan, Iraq, and elsewhere.
Pumpkinflowers is a reckoning by one of those young soldiers now grown into a remarkable writer. Part memoir, part reportage, part history, Friedman's powerful narrative captures the birth of today's chaotic Middle East and the rise of a twenty-first-century type of war in which there is never a clear victor and media images can be as important as the battle itself. Raw and beautifully rendered, Pumpkinflowers will take its place among classic war narratives by George Orwell, Philip Caputo, and Tim O'Brien. It is an unflinching look at the way we conduct war today.

"In Pumpkinflowers: A Soldier's Story Mr. Friedman has written a top-notch account of this under-analyzed war, persuasively arguing that it heralded a new style of combat in the Middle East, though no one knew it at the time." --Jennifer Senior, The New York Times "This superb book is partly a history of the war, partly a personal memoir, and partly a work of political analysis. But mainly it is an effort to tell the story of the young men who fought to defend something "the size of a basketball court"--not all of whom survived. Pumpkinflowers is rich enough to allow different readers to draw their own political conclusions, if they choose to draw them at all. Above all, it is a book about young men transformed by war, written by a veteran whose dazzling literary gifts gripped my attention from the first page to the last." --Bret Stephens, The Wall Street Journal "Sober and striking...on par with Tim O'Brien's "The Things They Carried" - its Israeli analog." --The New York Times Book Review "...phenomenal...extremely moving..." --Bari Weiss, The Wall Street Journal "Matti Friedman's powerful memoir of his IDF service in Lebanon in the late-'90s foreshadows the complexities of 21st-century warfare." --The New York Jewish Week "Friedman, a journalist and author of "The Aleppo Codex," writes with great feeling and insight.... The author's account of military life transcends the particulars of this tale." --Christian Science Monitor "Powerful account of youthful Israelis maturing, fighting, and dying at a forgotten Lebanon outpost. In this limber, deceptively sparse take on the Middle East's tightening spiral of violence, Friedman combines military history and personal experience on and off the line in deft, observant prose. The narrative is reminiscent of novels by Denis Johnson and Robert Stone, linking combat's violent absurdity to the traumatized perspectives of individual participants. A haunting yet wry tale of young people at war, cursed by political forces beyond their control, that can stand alongside the best narrative nonfiction coming out of Afghanistan and Iraq." --Kirkus Reviews, starred review "Remarkably educational and heartfelt: Friedman's experiences provide a critical historical perspective on the changing climate of war in the Middle East, shifting from short official conflicts into longer unwinnable wars full of guerilla tactics and the deliberate creation of media narratives and images. His lyrical writing, attention to detail, and personal honesty draw the reader into empathy along with understanding. Friedman's memoir deserves wide readership." --Publishers Weekly, starred review "fast and engaging... A compelling war memoir containing elements of terror, observation, boredom, and grim (at times absurd) humor. This is an excellent read..." --Library Journal, starred review "A compelling narrative, freighted with explosive geopolitical implications." --Booklist, starred review