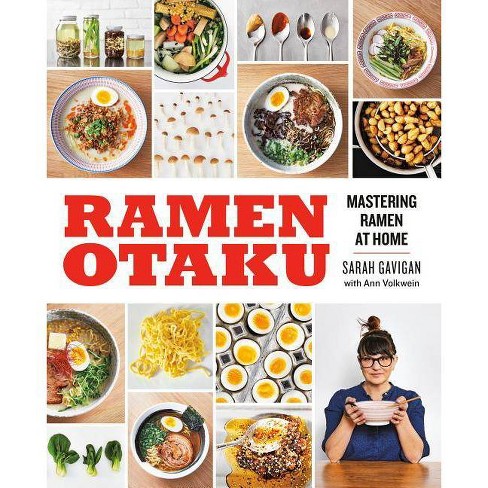 A guide to ramen for the home cook, from the chef behind the beloved shop Otaku Ramen. Sarah Gavigan is otaku. Loosely translated, she's a ramen geek. During her twenty years working in film production and as a music executive in L.A., Gavigan ate her way through the local ramen spots, but upon moving back to her native Nashville, she found she missed the steaming bowls of ramen she used to devour. So she dedicated herself to mastering the oft-secretive but always delicious art of ramen-making and opened her own shop within a few years. An Italian American born and raised in the South, Gavigan is an unlikely otaku. While her knowledge of ramen is rooted in tradition, her methods and philosophies are modern. Though ramen is often shrouded in mystery, Gavigan's 40+ recipes are accessible to the home cook who wants to learn about the cuisine but would sometimes rather make a quick stock in a pressure cooker than labor over a vat of liquid for twenty-four hours. Ramen Otaku strips the mystique from ramen while embracing its history, magic, and rightful place in the American home kitchen.

"If you're a fan of eats of the Alton Brown Good Eats or J. Kenji López-Alt Serious Eats varieties, this cookbook should be right up your alley."
--Nashville Scene "In this cookbook, Gavigan shares her secrets to making rich stews to satisfy all folks, no matter where they call home."
--Garden & Gun "Sarah is a walking ramen encyclopedia. In Ramen Otaku, she shares her journey in discovering her personal and delicious ramen style, and if you follow her lead, you can do the same."
--Sean Brock, author of Heritage

"Ramen Otaku is the book every ramen fiend who loves to cook has been waiting for. Sarah Gavigan has taken her journey from a life in the Los Angeles music scene back home to Nashville, where her obsession with Japanese soupy noodle bowls led her to open Otaku Ramen, a phenomenal restaurant I discovered years ago. Minus the flashy chef's pedigree, she was compelled to master her favorite food by necessity, making Sarah the perfect avatar for the home cook. The ritual of proper ramen takes days to produce which has been a boon for ramen restaurants, driving fans to their seats. Gavigan has demystified the process and in this superb book, educates, illuminates, and shares her secrets to classic and delicious ramen."
--Andrew Zimmern

"Sarah meticulously--as only an otaku can--articulates all the nuances of her subject with an approachability and thoroughness I have never before seen...Ramen Otaku is responsible for landing ramen on my family's regular meal rotation--and that's a tough roster to make!
--Zak Pelaccio, chef and restaurateur

"Sarah has given us the blueprint to create soulful and delicious food in our homes with a cuisine that can otherwise seem very intimidating to home cooks and even chefs. She expertly brings it down to earth and into our bellies."
--Alon Shaya, author of Shaya

Sarah Gavigan is a fourth-generation Nashvillian and music executive-turned-ramen otaku. After twenty years working in music licensing in Los Angeles, Gavigan returned to Nashville in 2010 and began to teach herself how to master ramen before opening her first restaurant, POP Nashville, in 2014, followed by Otaku Ramen in 2015. She has been featured in Food & Wine, Southern Living, Bon Appétit, Garden & Gun, Eater, The Kitchn, and many more.
If the item details above aren’t accurate or complete, we want to know about it. Report incorrect product info.