Right Back Where We Started From - by Joy Lanzendorfer (Hardcover) 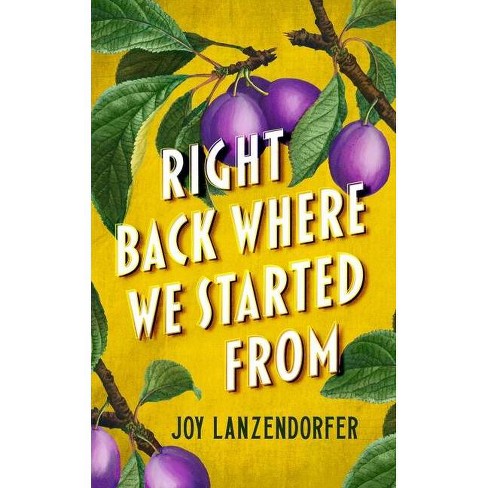 If misfortune hadn't gotten in the way, Sandra Sanborn would be where she belongs--among the rich and privileged instead of standing outside a Hollywood studio wearing a sandwich board in the hope of someone discovering her. It's tough breaking into the movies during the Great Depression, but Sandra knows that she's destined for greatness. After all, her grandmother Vira crossed the country during the Gold Rush and established the Sanborns as one of San Francisco's most prominent families, and her mother Mabel grew up in a lavish mansion and married into an agricultural empire. Success, Sandra feels, is in her blood. She just needs a chance to prove it.

In between failed auditions, Sandra receives a letter from a man claiming to be her father, which calls into question everything she believes about her family--and herself. As she tries to climb the social ladder, family secrets lurk in the background, pulling her down. Until Sandra confronts the truth about how Vira and Mabel gained and lost their fortunes, she will always end up right back where she started from.

Right Back Where We Started From is a sweeping, multigenerational work of fiction that explores the lust for ambition that entered into the American consciousness during the Gold Rush and how it affected our nation's ideas of success, failure, and the pursuit of happiness. It is a meticulously layered saga--at once historically rich, romantic, and suspenseful--about three determined and completely unforgettable women﻿.

"From the California Gold Rush to the San Francisco earthquake, through the Great Depression and World War II, Joy Lanzendorfer artfully weaves a beautifully textured saga. Yearnings, secrets, and shame shape the lives of three generations of American women as they dare to question the rigid societal expectations that confine them to proscribed roles and stifle ambition. Gripping prose and complex and memorable characters make this shining debut novel a pleasure to read."

-- "Liza Nash Taylor, author of Etiquette for Runaways and the forthcoming In All Good Faith"

"This multi-generational novel speaks of regaining what's lost and which you believe is rightfully yours to begin with...There's a sadness inherent in these stories, perhaps a lesson in humility. Weaving back and forth between the generations, the moral may be to be careful what you wish for."

"In Right Back Where We Started From Joy Lanzendorfer has crafted a terrific first novel, one brimming with energy, wit, and emotional resonance. Sandra Sanborn is a wonderful character, very much alive on the page. And, the novel captures, vividly, some of the crazier times in California's crazy history. Highly recommended!"

"Joy Lanzendorfer's thrill of a novel, Right Back Where We Started From, tells the story of an engaging young woman, eager to be discovered in 1930s Hollywood. But as she looks to the future, a letter from a man who claims to be her father pulls her to the unknown past. This is a novel of California dreaming, from the Gold Rush to the Hollywood Hills. Lanzendorfer writes with charm, style, and great energy."

-- "Ellen Sussman, New York Times bestselling author of four novels: A Wedding in Provence, The Paradise Guest House, French Lessons, and On a Night like This"
If the item details above aren’t accurate or complete, we want to know about it. Report incorrect product info.