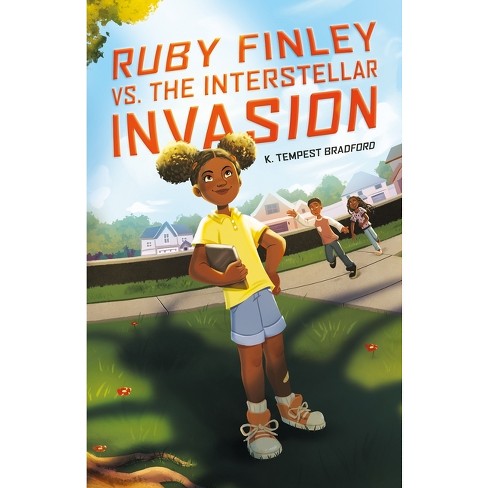 This backyard adventure-mystery by debut children's author K. Tempest Bradford is perfect for fans of Clean Getaway, The Last Last Day of Summer, and Sideways School.

Eleven-year-old Ruby is a Black girl who loves studying insects and would do just about anything to be an entomologist, much to the grossed-out dismay of her Gramma. Ruby knows everything there is to know about insects so when she finds the weirdest bug she's ever seen in her front yard, she makes sure no one is looking and captures it for further study. But then Ruby realizes that the creature isn't just a regular bug. And it has promptly burned a hole through her window and disappeared. Soon, random things around the neighborhood go missing, and no one's heard from the old lady down the street for a week. Ruby and her friends will have to recover the strange bug before the feds do. Ruby is the science hero we've all been waiting for!

K. Tempest Bradford is a science fiction and fantasy writer, writing instructor, media critic, reviewer, and podcaster. Her short fiction has appeared in multiple anthologies and magazines. She's the host of ORIGINality, a podcast about the roots of creative genius. Her media criticism and reviews can be found on NPR, io9, and in books about Time Lords. When not writing, she teaches classes on writing inclusive fiction through LitReactor and WritingtheOther.com. Ruby Finley vs. the Interstellar Invasion is her children's debut.
If the item details above aren’t accurate or complete, we want to know about it. Report incorrect product info.