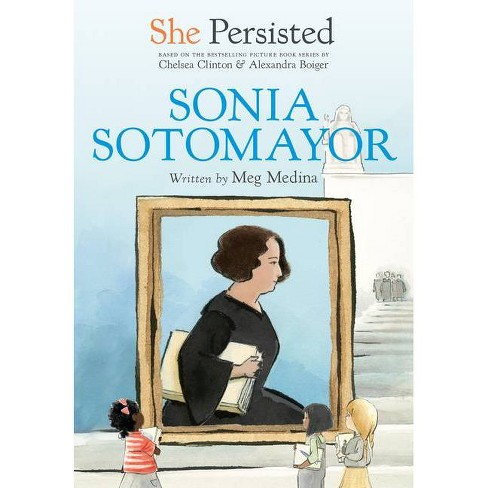 Inspired by the #1 New York Times bestseller She Persisted by Chelsea Clinton and Alexandra Boiger comes a chapter book series about women who stood up, spoke up and rose up against the odds! Sonia Sotomayor is the first Latina Supreme Court Justice in the history of the United States, but her road there wasn't easy. She overcame many challenges along the way, including a diagnosis of diabetes at age seven. But she didn't let that stop her from achieving her dream and inspiring children all over the world to work hard and believe in themselves. In this chapter book biography by award-winning author Meg Medina, readers learn about the amazing life of Sonia Sotomayor--and how she persisted. Complete with an introduction from Chelsea Clinton! Praise for She Persisted: Sonia Sotomayor Engaging and accessible . . . The compelling story of an inspirational role model. --Kirkus Reviews

Praise for She Persisted: Sonia Sotomayor Engaging and accessible . . . The compelling story of an inspirational role model. --Kirkus Reviews

Meg Medina (megmedina.com) is a New York Times bestselling and award-winning author who writes for children and teens. She has won numerous awards for her work, including the Ezra Jack Keats Writer Award as well as the Pura Belpré Award and Honor. She is the 2019 Newbery Medal winner for her novel Merci Suárez Changes Gears. When she is not writing, she works on community projects that support Latinx youth. She lives with her family in Richmond, Virginia. You can follow Meg on Twitter @meg_medina and on Instagram @megmedinabooks.