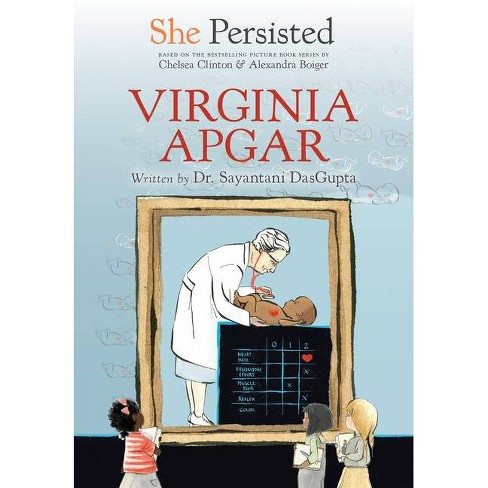 "A biography of Virginia Apgar in the She Persisted series"--

Inspired by the #1 New York Times bestseller She Persisted by Chelsea Clinton and Alexandra Boiger comes a chapter book series about women who stood up, spoke up and rose up against the odds! In this chapter book biography by bestselling author and physician Sayantani DasGupta, readers learn about the amazing life of Virginia Apgar--and how she persisted. There weren't many women who tried to become doctors when Virginia Apgar went to medical school--but she didn't let that stop her. After a professor discouraged from becoming a surgeon, she became an anesthesiologist instead and created the famous Apgar test to check the health of newborn babies. It's a test that's still used in hospitals across the world today! Complete with an introduction from Chelsea Clinton, black-and-white illustrations throughout, and a list of ways that readers can follow in Virginia Apgar's footsteps and make a difference! And don't miss out on the rest of the books in the She Persisted series, featuring so many more women who persisted, including Sally Ride, Temple Grandin, and more! Praise for She Persisted: Virginia Apgar A fast-paced tale that will spark curiosity--Dr. Apgar would approve. --Kirkus Reviews Equally appealing for report writers and readers looking for role models. --Booklist

Praise for She Persisted: Virginia Apgar A fast-paced tale that will spark curiosity--Dr. Apgar would approve. --Kirkus Reviews Equally appealing for report writers and readers looking for role models. --Booklist

Dr. Sayantani DasGupta (sayantanidasgupta.com) is the New York Times bestselling author of the critically acclaimed, Bengali folktale, and string theory-inspired Kiranmala and the Kingdom Beyond books, the first of which--The Serpent's Secret--was a Bank Street Best Book of the Year, a Booklist Best Middle Grade Novel of the 21st Century, and an EB White Read Aloud Honor Book. Sayantani is a pediatrician by training, but now teaches at Columbia University. When she's not writing or reading, Sayantani spends time watching cooking shows with her trilingual children and protecting her black Labrador retriever Khushi from the many things that scare him, including plastic bags. She is a team member of We Need Diverse Books. You can follow Sayantani on Twitter @sayantani16.