Sisters of Night and Fog - by Erika Robuck (Paperback) 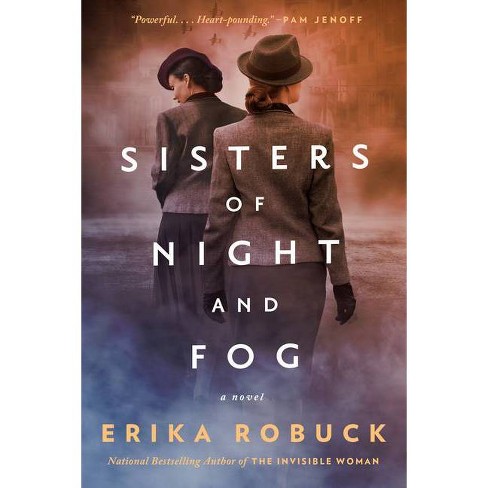 "Two women, two countries. Nothing in common but a call to resist. 1940. In a world newly burning with war, and in spite of her American family's wishes, Virginia decides to stay in occupied France with her French husband. She's sure that if they keep their heads down they'll make it through. But as the call to resist the enemy grows around her, Virginia must decide if she's willing to risk everything to help those in need. Nineteen-year-old Violette is a crack shot with an unquenchable spirit of adventure, and she's desperate to fight the Nazis however she can. When her mother sends her to find an exiled soldier, Violette meets the man who will change her life. Then tragedy strikes, and Britain's clandestine war organization-the Special Operations Executive-learns of Violette's dual citizenship and adept firearm handling and starts to recruit her. But Violette is no stranger to loss and must decide whether the cost of defiance is too great a price to pay. Set across the European theater of WWII, Sisters of Night and Fog tells the story of two women whose clandestine deeds come to a staggering halt when they are brought together at Ravensbrèuck concentration camp. A striking reminder of how deeply we are all connected, which forces us to ask, "Could I have done what they did?""--

Named a Most Anticipated Book of 2022 by Buzzfeed - Bookbub - BookTrib - and more!

Two women, two countries. Nothing in common but a call to fight. A heart-stopping new novel based on the extraordinary true stories of an American socialite and a British secret agent whose stunning acts of courage collide in the darkest hours of World War II. 1940. In a world newly burning with war, and in spite of her American family's wishes, Virginia d'Albert-Lake decides to stay in occupied France with her French husband. She's sure that if they keep their heads down, they'll survive. But is surviving enough? Nineteen-year-old Violette Szabo has seen the Nazis' evil up close and is desperate to fight them. But when she meets the man who'll change her life only for tragedy to strike, Violette's adrift. Until she enters the radar of Britain's secret war organization--the Special Operations Executive--and a new fire is lit in her as she decides just how much she's willing to risk to enlist. As Virginia and Violette navigate resistance, their clandestine deeds come to a staggering halt when they are brought together at Ravensbrück concentration camp. The decisions they make will change their lives, and the world, forever.

Violette and Virginia are two women whose stories needed to be told, particularly now that most of the people who fought in WWII are gone. Robuck has done their memory great honor.
--BookPage (starred review) Following her triumph The Invisible Woman, Erika Robuck returns with an even more powerful book. Inspired by true stories, this incredible book tells of American Virginia and Violette, each swept up in the current of World War II and forced to choose whether to risk everything for the things in which she believes. Their lives collide in powerful and irrevocable ways that will hold readers spellbound... Sisters of Night and Fog stands head and shoulders above for its meticulous research, heart pounding storytelling, compelling relationships and important message. Bravo!
--Pam Jenoff, New York Times bestselling author of The Woman with the Blue Star A novel of duty, sacrifice, fate, and hope, set in a world steeped in courage and madness. Searing, powerful, and told through the lens of two overlooked historical figures who gave up nearly everything to fight against tyranny in one of the 20th century's darkest hours, Erika Robuck's Sisters of Night and Fog soars. Two women--connected at the outset by fate, chance and little else--hurtle toward a tragic date with destiny in the infamous Ravensbruck Concentration Camp, where prisoners are starved and tortured, and not all will make it out alive. Based very closely on the true stories of two incredible 20th century women in the shadows, who risked their lives to save others, this novel, devastating in its truth and power, will break your heart and stay with you long after you've turned the final page.
--Kristin Harmel, New York Times bestselling author of The Book of Lost Names and The Forest of Vanishing Stars "Few writers are as skilled as Erika Robuck at the exacting art of spinning the raw truth of history into the vital tapestry of fiction. With Sisters of Night and Fog, based upon the experiences of renowned WWII SOE agents Violette Szabo and Virginia d'Albert-Lake, Robuck works her magic again. She takes the well-documented stories of these two women, whose courage under the most harrowing circumstances almost defies description, and she makes us believe. This impeccably researched and profoundly moving novel will stay with readers long after its devastating and heartfelt conclusion, and they will marvel, as I did, at the valour of its heroines and the artistry of its author."
--Jennifer Robson, bestselling author of The Gown "Erika Robuck has once again proved her mastery of biographical fiction, respecting the historical record as she weaves together the true stories of two endlessly courageous women whose daring and sacrifice helped defeat the Nazis. Utterly compelling, beautifully written, and meticulously researched, Sisters of Night and Fog is a book you sink into, one that becomes your world as you read it. I loved this book madly."
--Tasha Alexander, New York Times bestselling author of The Dark Heart of Florence

"Compelling and brilliantly researched, Erika Robuck absolutely delivers with this book. Evocative and intimate, here is an unforgettable dovetailing of the real-life stories of two remarkably brave and inspiring women. A World War Two tale that has surely been pleading to be told."
--Susan Meissner, bestselling author of The Nature of Fragile Things Robuck delivers an enticing tale of two women who risk it all to help the French Resistance.... Robuck lures the reader into the mud and the muck alongside the protagonists as they face the dangers and destruction wrought by the conflict. Fans of WWII dramas are in for a treat.
--Publishers Weekly (starred review)

Erika Robuck is the national bestselling author of Receive Me Falling, Hemingway's Girl, Call Me Zelda, Fallen Beauty, The House of Hawthorne, and The Invisible Woman. She is a contributor to the anthology Grand Central: Original Stories of Postwar Love and Reunion and to the Writer's Digest essay collection Author in Progress. In 2014, Robuck was named Annapolis' Author of the Year, and she resides there with her husband and three sons.
If the item details above aren’t accurate or complete, we want to know about it. Report incorrect product info.