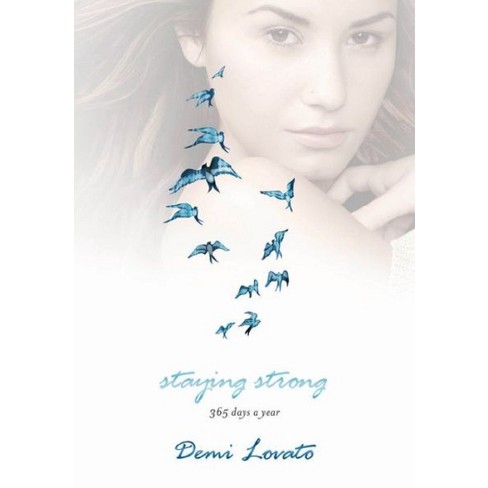 Demi Lovato is a superstar with 76 million Instagram followers and 36 million Facebook fans. For the first time in her own words, Demi offers 365 daily affirmations that will console, support, and inspire readers to stay strong.

Demi Lovato wakes up each morning and affirms her commitment to herself--to her health, her happiness, her being. Those commitments are the bedrock of her recovery and her work helping other young people dealing with the issues she lives with every single day.

Demi is a platinum-selling recording artist whose latest album--DEMI--is already a smash hit. She's about to embark on her second season as a judge on X-Factor, and just launched The Lovato Treatment Scholarship Program. And she is an outspoken advocate for young people everywhere. Demi is also a young woman finding her way in the world. She has dealt deftly with her struggles in the face of public scrutiny, and she has always relied, not just on friends and family, but daily affirmations of her self-worth and value. Affirmations that steady her days and strengthen her resolve. Those affirmations have grown into STAYING STRONG, a powerful 365-day collection of Demi's most powerful, honest, and hopeful insights. Each day will provide the readers with a quote, a personal reflection and a goal. These are Demi's words. Words she lives by and shares with the people she loves and total strangers alike. They are a powerful testament to a young woman standing up and fighting back.

With an affirmation and inspirational quote for every single day of the year, you can not only channel Demi's spirit, but get an idea of just what is is that's helped her turn things around. It's kind of like a window into her mind and whether you read it cover to cover or dip in and out, there's no question that you'll come away from it with a smile on your face and something to think about.--Sugarscape

Demi Lovato's fame began when she was cast on Barney and Friends in 2002. From the outside, she was all smiles, but as she grew up in front of the camera--the star of the record-breaking Camp Rock franchise; leading lady of her own Disney show, Sonny with a Chance; and a budding music career--she was falling apart. As Demi entered adolescence, she was being bullied, and she struggled with bulimia, suicidal thoughts, substance abuse, and eventually secretly began cutting herself.

Her career was taking off, but she bowed out of her world-wide tour and checked herself into rehab, which she successfully completed. She started the Lovato Treatment Scholarship program to help others with their illnesses. She appeared as a judge on X-Factor, and her album Demi (2013) went platiumum. Confident, Lovato's fifth studio album, was released in 2015, and Tell Me You Love Me was released in 2017 and featured Sorry Not Sorry, Lovato's highest charting song in the US. Demi has many accolades, including two Grammy nominations, one MTV Video Music Award, five People's Choice Awards, twenty-five Teen Choice Awards nominations, 14 of which she has won, one ALMA award, a Billboard Women in Music Award and several others. Outside of her work in the entertainment industry, Lovato is involved in philanthropic activity through charity work and various social and environmental causes. In May 2013 she was awarded for her dedication as a mentor to teens and young adults with mental health challenges at a National Children's Mental Health Awareness day hosted by SAMHSA in Washington.
If the item details above aren’t accurate or complete, we want to know about it.

5 out of 5 stars
Would recommend
Kristi594 - 8 years ago
My daughter loves Demi... She is a great ro-model for young girls. Very inspiring words! Cant wait to give it to her for Christmas.
4 guests found this review helpful. Did you?

5 out of 5 stars
Robin - 9 years ago
for any lovatics or even anyone who wants an uplifting, empowering daily reading book, this is perfect.
12 guests found this review helpful. Did you?

5 out of 5 stars
kyra - 9 years ago
i love this book ! this isnt like a book that you would usually ready. it is actually a quote for every 365 days of the year. with that quote there is a short reading about that quote and a goal for the day ! i think this would be an awesome present for someone who loves demi as much as I do!!
11 guests found this review helpful. Did you?

5 out of 5 stars
Dantana - 9 years ago
For those who need and extra little boost to get through the hard days, this is the perfect book. Beautifully put together and reflects who Demi truly is. This is a perfect gift for any Lovatic.
21 guests found this review helpful. Did you?