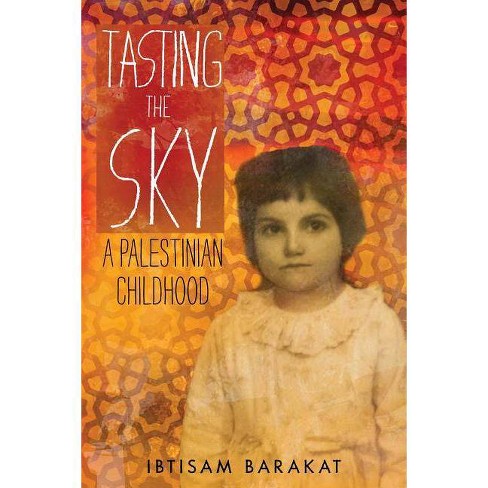 The author remembers her childhood in Ramallah and as a Palestinian refugee in the late 1960s.

When a war ends it does not go away, my mother says.It hides inside us . . . Just forget!
But I do not want to do what Mother says . . . I want to remember.

In this groundbreaking memoir set in Ramallah during the aftermath of the 1967 Six-Day War, Ibtisam Barakat captures what it is like to be a child whose world is shattered by war. With candor and courage, she stitches together memories of her childhood: fear and confusion as bombs explode near her home and she is separated from her family; the harshness of life in the Middle East as a Palestinian refugee; her unexpected joy when she discovers Alef, the first letter of the Arabic alphabet. This is the beginning of her passionate connection to words, and as language becomes her refuge, allowing her to piece together the fragments of her world, it becomes her true home. Transcending the particulars of politics, Tasting the Sky: A Palestinian Childhood is an illuminating and timely book that provides a telling glimpse into a part of the Middle East that has become an increasingly important part of the puzzle of world peace. Winner of the Arab American National Museum Book Award for Children's/YA Literature "In vivid, beautiful prose, Ibtisam Barakat transports readers into a place few Westerners have ever seen--the interior life of a young girl and her family in the occupied West Bank. This book, appropriate for readers young and old, holds literature's great power: the power to humanize the 'other, ' and to therefore change the way we understand our world." --Sandy Tolan, author of The Lemon Tree: An Arab, a Jew, and the Heart of the Middle East

"A spare, eloquent memoir. . . . What makes [it] so compelling is the immediacy of the child's viewpoint, which depicts both conflict and daily life without exploitation or sentimentality." --"Booklist"

"Beautifully crafted vignettes . . .[bring] to life a Palestinian world that may be unfamiliar to American readers, but which they will come to know and appreciate. Readers will be charmed by the writer-to-be as she falls in love with chalk, the Arabic alphabet, and the first-grade teacher who recognizes her abilities." --"School Library Journal"

Ibtisam Barakat is the author of Tasting the Sky: A Palestinian Childhood, which received three starred reviews and was the winner of the Arab American National Museum Book Award. She is also a poet, speaker, and social justice advocate, especially in the lives of children and teens. She was born in Beit Hanina, East Jerusalem, grew up in Ramallah, Palestine, and currently lives in Columbia, Missouri.
If the item details above aren’t accurate or complete, we want to know about it. Report incorrect product info.