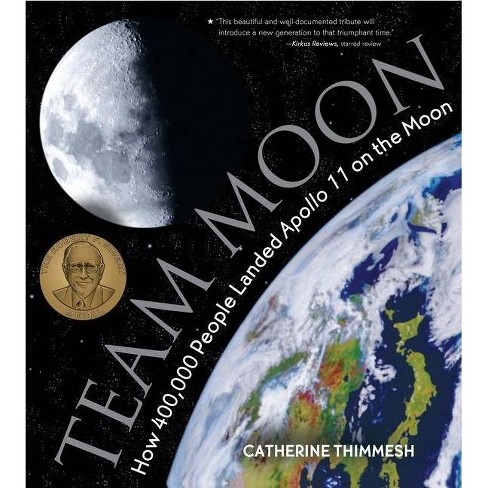 A riveting account of the dedication, ingenuity, and perseverance of the greatest team ever--the team that worked to first put man on the moon.

2007 Sibert Medal Winner "This excellent book will walk the reader step by step through man's first landing on the moon. With photos and text, Catherine Thimmesh accurately portrays the accomplishments of those 'unsung heroes, ' the mission control team that assured success of Apollo 11."
--James A. Lovell, astronaut, Apollo 8, Apollo 13, Gemini 7, and Gemini 12 Here is a rare perspective on a story we only thought we knew. For Apollo 11, the first moon landing, is a story that belongs to many, not just the few and famous. It belongs to the seamstress who put together twenty-two layers of fabric for each space suit. To the engineers who created a special heat shield to protect the capsule during its fiery reentry. It belongs to the flight directors, camera designers, software experts, suit testers, telescope crew, aerospace technicians, photo developers, engineers, and navigators. Gathering direct quotes from some of these folks who worked behind the scenes, Catherine Thimmesh reveals their very human worries and concerns. Culling NASA transcripts, national archives, and stunning NASA photos from Apollo 11, she captures not only the sheer magnitude of this feat but also the dedication, ingenuity, and perseverance of the greatest team ever--the team that worked to first put man on that great gray rock in the sky.

Winner of the Robert F. Sibert Informational Book Award * "This behind-the-scenes look at the first Apollo moon landing has the feel of a public television documentary in its breadth and detail." --Publishers Weekly, starred review * "This beautiful and well-documented tribute will introduce a new generation to that triumphant time." --Kirkus Reviews, starred review "This dramatic account will mesmerize even readers already familiar with the event---and also leave them awed by the level of care and dedication it took to surmount so many daunting technological challenges." --School Library Journal "Thimmesh gives names and voices to the army that got Neil Armstrong and company to the moon and back. The result is a spectacular and highly original addition to the literature of space exploration." --Horn Book "Catherine Thimmesh tells us the stories of the 400,000 people it took to make...that 'one giant leap'...Their collective devotion to an exciting goal comes across strongly." --Chicago Tribune * "Kids . . . probably feel they know quite a bit about the first manned moon landing. But until they've read Thimmesh's breathless behind-the-scenes account, they know zip." --Bulletin, starred review "An edge-of-your-seat adventure . . . lavishly illustrated . . . this exhilarating book . . . will captivate." --Chicago Sun-Times "So often in history, the actual participants get lost in the retelling of the story. But in Thimmesh's highly engaging book, Team Moon, the thousands of people responsible for landing man on the moon finally and deservedly get their due. This engrossing historical account is extremely timely; for it is today's children who will make up the team of tomorrow. These kids will be returning to the moon, privatizing space, and, as I hope, finally placing human footprints upon Martian soil. And as this remarkable book shows, it'll take astronauts -- and a whole lot of others -- to fuel the space exploration that is our future." --Buzz Aldrin, astronaut, Apollo 11, and moonwalker on the first lunar landing "Thimmesh's enthusiasm for her subject is palpable, and the sense of excitement she brings is as vital to Team Moon's success the book's very premise." --Chris Barton, author of Shark vs. Train An NCTE Orbis Pictus Honor Book AAAS/Subaru SB&F Prize for Excellence in Science Books An ALA Best Book for Young Adults An ALA Notable Children's Book --

Catherine Thimmesh is the award-winning author of many books for children, including Girls Think of Everything and Lucy Long Ago. Her books have received numerous starred reviews, appeared on best books lists, and won many awards, including the IRA Children's Book Award and Minnesota Book Award. She lives in Minnesota with her family. Visit her website at www.catherinethimmesh.com.
If the item details above aren’t accurate or complete, we want to know about it. Report incorrect product info.