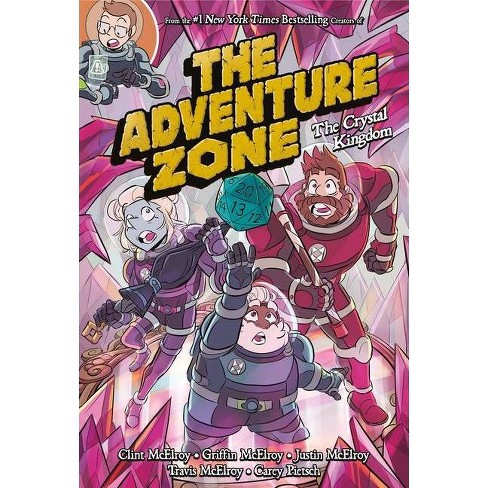 Based on the blockbuster podcast where the McElroy brothers and their dad play a tabletop RPG and illustrated by cartooning powerhouse Carey Pietsch, The Adventure Zone: The Crystal Kingdom takes this #1 New York Times bestselling series to haunting new heights.

A desperate call for help interrupts holiday celebrations at the Bureau of Balance, and sends Taako, Magnus and Merle on a high-stakes mission to find and Reclaim a fourth deadly relic: a powerful transmutation stone, hidden somewhere in the depths of a floating arcane laboratory that's home to the Doctors Maureen and Lucas Miller. An unknown menace has seized control of the stone, and is using it to transform the lab into a virulent pink crystal that spreads to everything it touches. It's only a matter of time before this sparkling disaster crash-lands, but in order to find the stone and save the whole planet from being King Midased, our heroes will have to fight their way through a gauntlet of rowdy robots and crystal golems, decide whether they can trust the evasive Lucas Miller, and solve the mystery of what--or who--has put them all in peril, before there's no world left to save.

Meet the McElroys! Clint was born first, which recent studies have shown is the best procedure for fathers and sons; then came Justin, Travis, and, last but not least, Griffin. This hilarious family gained fame in the world of podcasts with My Brother, My Brother and Me (which spawned a popular tv show), Sawbones, Shmanners, Rose Buddies, and a farcical romp called The Adventure Zone.

Carey Pietsch is a cartoonist based out of Brooklyn, New York. Her work includes drawing for Lumberjanes and the Mages of Mystralia webcomic. Carey also makes Keepsakes and other original comics about magic and empathy. Along with brightening her workdays, The Adventure Zone got her to join a D&D campaign.
If the item details above aren’t accurate or complete, we want to know about it. Report incorrect product info.