The Day of the Jackal - by Frederick Forsyth (Paperback) 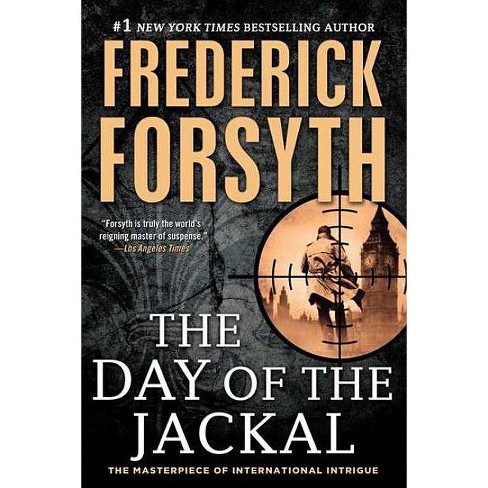 "He is known only as 'the Jackal'--a cold, calculating assassin without emotion or loyalty or equal. He has just received from an enigmatic employer a contract to eliminate one of the most heavily guarded men in the world: Charles de Gaulle, president of France"--P. [4] of cover.

THE CLASSIC THRILLER FROM #1 NEW YORK TIMES BESTSELLING AUTHOR FREDERICK FORSYTH "The Day of the Jackal makes such comparable books such as The Manchurian Candidate and The Spy Who Came in from the Cold seem like Hardy Boy mysteries."--The New York Times The Jackal. A tall, blond Englishman with opaque, gray eyes. A killer at the top of his profession. A man unknown to any secret service in the world. An assassin with a contract to kill the world's most heavily guarded man. One man with a rifle who can change the course of history. One man whose mission is so secretive not even his employers know his name. And as the minutes count down to the final act of execution, it seems that there is no power on earth that can stop the Jackal.

"When it comes to espionage, international intrigue, and suspense, Frederick Forsyth is a master." --The Washington Post Book World

"Inventive, organized, believable, and absolutely spellbinding...Suspense fiction at its very best and a cliffhanger par excellence."--The Philadelphia Inquirer "A masterpiece tour de force of crisp, sharp, suspenseful writing...It's an awful cliché to say that 'you won't be able to put this book down, ' but cliché or not, it's the truth."--The Wall Street Journal

Frederick Forsyth is the #1 New York Times bestselling author of seventeen novels, including The Day of the Jackal and The Odessa File, as well as short story collections and a memoir. A former Air Force pilot, and one-time print and television reporter for the BBC, he has had four movies and two television miniseries made from his works. He is the winner of three Edgar Awards, and in 2012 he won the Diamond Dagger Award from the Crime Writers' Association, a lifetime achievement award for sustained excellence. He lives in Hertfordshire, England.
If the item details above aren’t accurate or complete, we want to know about it. Report incorrect product info.