The Edge of Physics - by Anil Ananthaswamy (Paperback) 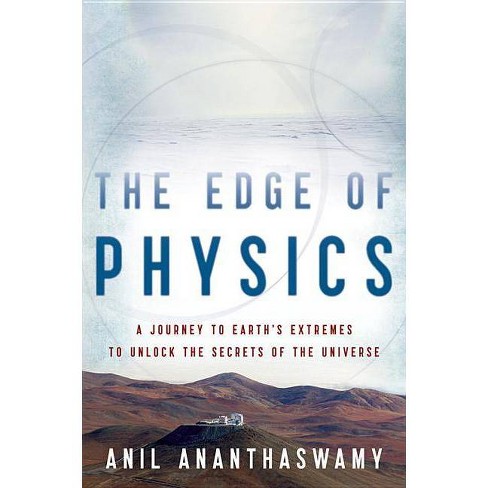 The story of modern cosmology told through a tour of the most extraordinary detectors and telescopes in the world.

In this deeply original book, science writer Anil Ananthaswamy sets out in search of the telescopes and detectors that promise to answer the biggest questions in modern cosmology. Why is the universe expanding at an ever faster rate? What is the nature of the "dark matter" that makes up almost a quarter of the universe? Why does the universe appear fine-tuned for life? Are there others besides our own?

Ananthaswamy soon finds himself at the ends of the earth--in remote and sometimes dangerous places. Take the Atacama Desert in the Chilean Andes, one of the coldest, driest places on the planet, where not even a blade of grass can survive. Its spectacularly clear skies and dry atmosphere allow astronomers to gather brilliant images of galaxies billions of light-years away. Ananthaswamy takes us inside the European Southern Observatory's Very Large Telescope on Mount Paranal, where four massive domes open to the sky each night "like dragons waking up."

He also takes us deep inside an abandoned iron mine in Minnesota, where half-mile-thick rock shields physicists as they hunt for elusive dark matter particles. And to the East Antarctic Ice Sheet, where engineers are drilling 1.5 miles into the clearest ice on the planet. They're building the world's largest neutrino detector, which could finally help reconcile quantum physics with Einstein's theory of general relativity.

The stories of the people who work at these and other dramatic research sites--from Lake Baikal in Siberia to the Indian Astronomical Observatory in the Himalayas to the subterranean lair of the Large Hadron Collider--make for a compelling new portrait of the universe and our quest to understand it. An atmospheric, engaging, and illuminating read, The Edge of Physics depicts science as a human process, bringing cosmology back down to earth in the most vivid terms.

"Part history lesson, part travel log, part adventure story, The Edge of Physics is a wonder-steeped page-turner." -- SEED Magazine, 3/2/10 "These experiments and others are heroic in every sense, and Ananthaswamy captures their excitement--and the personalities of the scientists behind them--with enthusiasm and insight." Publishers Weekly, 1/4/10. "Sure to appeal to general readers interested in science books without the philosophy and mathematics found in drier, more academic physics titles." -- Library Journal. "Physicists are trying to understand the furthest reaches of space and the furthest extremes of matter and energy. To do it, they have to trek to some of the furthest places on Earth--from deep underground, to forbidding mountains, to the cold of Antarctica. Anil Ananthaswamy takes us on a thrilling ride around the globe and around the cosmos, to reveal the real work that goes into understanding our universe."--Sean Carroll, California Institute of Technology, and author of From Eternity to Here: The Quest for the Ultimate Theory of Time "An excellent book. The author has a great knack for making difficult subjects comprehensible. I thoroughly enjoyed it."--Sir Patrick Moore, former president of the British Astronomical Society and presenter of the BBC's The Sky at Night "Ananthaswamy's juxtaposition of extreme travel and extreme science offers a genuinely novel route into the story of modern cosmology. His tale turns on the price of success: we already know so much about our universe that it becomes hugely difficult--even risky--to pry loose from nature that next burst of insight. The result is a well written and genuinely accessible account of what it takes to push past the edge of human knowledge."--Thomas Levenson, author of Newton and the Counterfeiter and Einstein in Berlin "Clean, elegant prose, humming with interest."--Robert MacFarlane, author of Mountains of the Mind and The Wild Places

"The Edge of Physics...is, quite simply, the ultimate physics-adventure travelogue...as an adventure story and a fly-on-the-wall account of remote places that most of us will never visit, The Edge of Physics is brilliant." --PhysicsWorld
"Ananthaswamy displays a writer's touch for the fascinating detail...whether he is in an abandonded iron mine in Minnesota's Mesabi Range or the frigid Siberian expanse of Lake Baikal, he finds intrepid physicists and explains to us why these weird places are the only locations on the planet where these experiments could be done." --Washington Post
"A grand tour of modern day cosmology's sacred places...evocative...engaging...refreshing...a taste of science in the heroic mode." --Sky At Night "Ananthaswamy, a science writer and editor, smoothly weaves together the stories of people who help push science forward, from principal investigators to research institute gardeners, with exquisitely clear explanations of the questions they hope to solve -- and why some research can be done only at the edge of the world." --ScienceNews "A remarkable narrative that combines fundamental physics with high adventure... Ananthaswamy is a worthy guide for both journeys." --New Scientist "The Edge of Physics is an accomplished and timely overview of modern cosmology and particle astrophysics. Ananthaswamy's characterizations of the many physicists he meets are on the mark... Ananthaswamy conveys that cutting-edge science is a human endeavour." --Nature

"Ananthaswamy's investigation of current experiments in physics bypasses the mathematics of the field, making it easier for the average reader to dig in and enjoy the amazing discoveries a --
If the item details above aren’t accurate or complete, we want to know about it.

Enjoying God in Everything - by Steve DeWitt (Paperback)

Through Two Doors at Once - by Anil Ananthaswamy (Paperback)

The Trouble with Physics - by Lee Smolin (Paperback)

An Introduction to X-Ray Physics, Optics, and Applications - by Carolyn MacDonald (Hardcover)