The Fall of the House of Cabal - (Johannes Cabal Novels, 5) by Jonathan L Howard (Paperback) 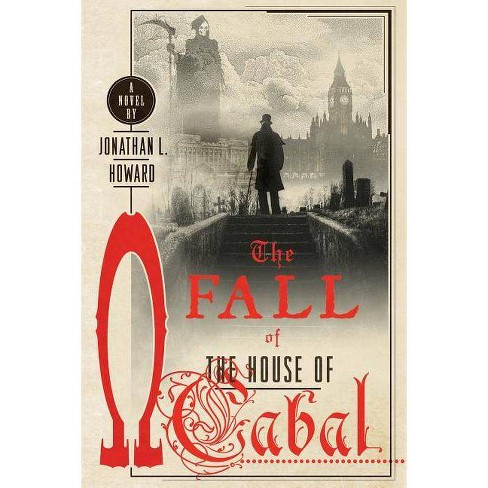 Johannes Cabal, a necromancer of some little infamy, has come into possession of a vital clue that may lead him to his ultimate goal: a cure for death. The path is vague, however, and certainly treacherous as it takes him into strange territories that, quite literally, no one has ever seen before. The task is too dangerous to venture upon alone, so he must seek assistance, comrades for the coming travails.

So assisted--ably and otherwise--by his vampiric brother, Horst, and by the kindly accompaniment of a criminologist and a devil, he will encounter ruins and diableries, mystery and murder, the depths of the lowest pit and a city of horrors. London, to be exact. Yet even though Cabal has risked such peril believing he understands the dangers he faces, he is still underestimating them. He is walking into a trap of such arcane complexity that even the one who drew him there has no idea of its true terrors. As the snare closes slowly and subtly around them, it may be that there will be no survivors at all. The Fall of the House of Cabal is the fifth book in Jonathan L. Howard's acclaimed Johannes Cabal series.

Fans of Howard's witty prose and morbid humor will not be disappointed; his characteristic blend of horror, comedy, fantasy, and drama is particularly effective in this installment. Cabal remains an entertaining antihero whose complexities have deepened over time, and the conclusion of the narrative threads that have spanned the previous four Cabal books is both satisfying and touching. --Publishers Weekly

Howard makes it look easy to paint a soul-stealing, murdering necromancer as a sympathetic character; that, folks, is worth the price of admission. --San Diego Union-Tribune Howard is a supremely talented writer and the Johannes Cabal series makes for superb reading. It would be easy at this point to say if you like Rankin or Fforde or Pratchett or Holt, then you will love these books, but while it may well be true, it would be doing Howard a disservice. --Sci-Fi-London Howard's Dreamlands will thrill fans of H.P. Lovecraft, but Cabal leaves a permanent mark on even the most fluid of landscapes, and Howard's writing shines, sketching out a personality both fascinating and heartbreaking. --BookGeeks Cabal, the detective and necromancer, is full of charismatic amorality, making him both a classical and refreshing antihero. --Time Out Chicago Jonathan L. Howard has such an effortless way with monsters and the undead that you might suspect him of being, like his creation, Johannes Cabal, a necromancer. The series is addictive. --Richard Kadrey, author of the Sandman Slim series In the vein of the comic horror-fantasies of Tom Holt and Christopher Moore but substantially weirder. --Booklist Johannes Cabal would kill me for saying this, but he's my favorite zeppelin-hopping detective. The fellow has got all the charm of Bond and the smarts of Holmes--without the pesky morality. --Daniel H. Wilson, author of Robopocalypse

JONATHAN L. HOWARD is a game designer, scriptwriter, and a veteran of the computer-games industry since the early nineties, with titles such as the Broken Sword series to his credit. He is author of Johannes Cabal the Necromancer, Johannes Cabal the Detective, Johannes Cabal: The Fear Institute, The Brothers Cabal, and Carter & Lovecraft, as well as the young adult novels Katya's World and Katya's War. He lives in the United Kingdom with his wife and daughte
If the item details above aren’t accurate or complete, we want to know about it. Report incorrect product info.