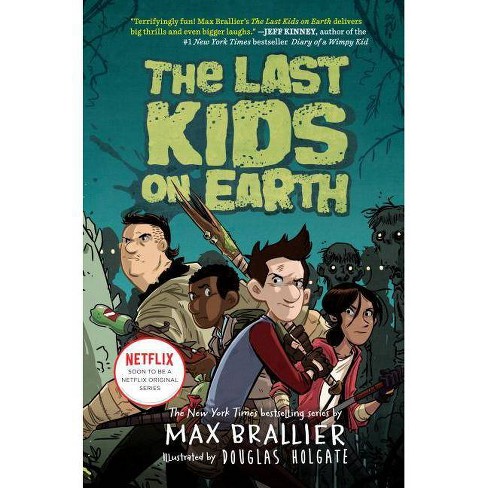 A Netflix Original series! The New York Times and USA Today bestselling series, with over 5 million copies in print! Terrifyingly fun! Delivers big thrills and even bigger laughs.--Jeff Kinney, author of the #1 New York Times bestseller Diary of a Wimpy Kid Ever since the monster apocalypse hit town, average thirteen year old Jack Sullivan has been living in his tree house, which he's armed to the teeth with catapults and a moat, not to mention video games and an endless supply of Oreos and Mountain Dew scavenged from abandoned stores. But Jack alone is no match for the hordes of Zombies and Winged Wretches and Vine Thingies, and especially not for the eerily intelligent monster known only as Blarg. So Jack builds a team: his dorky best friend, Quint; the reformed middle school bully, Dirk; Jack's loyal pet monster, Rover; and Jack's crush, June. With their help, Jack is going to slay Blarg, achieve the ultimate Feat of Apocalyptic Success, and be average no longer! Can he do it? Told in a mixture of text and black-and-white illustration, this is the perfect book for any kid who's ever dreamed of starring in his or her own comic book or video game. And then grab the rest of the series, now a New York Times bestseller!

Terrifyingly fun! Max Brallier's The Last Kids on Earth delivers big thrills and even bigger laughs.--Jeff Kinney, author of the #1 New York Times bestseller Diary of a Wimpy Kid * Middle-grade readers, particularly boys, will find Jack's pitch-perfect mix of humor, bravado, and self-professed geekiness impossible to resist. . . . The marriage of text and illustration serves as a perfect example of what an illustrated novel can and should be.--Kirkus Reviews, starred review * Terrifically funny . . . Snarky end-of-the-world fun.--Publisher's Weekly, starred review * This book provides loads of laughs. . . . A gross-out good time with surprisingly nuanced character development.--School Library Journal, starred review The video-game-like plotting, gross-out humor, frequent pop-culture references, and quippy dialogue make this a great fit for reluctant readers. Recommend to Wimpy Kid fans looking for a horror-lite adventure.--Booklist Young zombie fans will rejoice in this new series that has all the oozing (by the zombies) and heroism (by the kids) that they could hope for.--The Bulletin of the Center for Children's Books

Max Brallier is a New York Times, USA Today, and Wall Street Journal bestselling author. His books and series include The Last Kids on Earth, Eerie Elementary, Mister Shivers, Galactic Hot Dogs, and Can YOU Survive the Zombie Apocalypse? He is a writer and producer for Netflix's Emmy-award-winning adaptation of The Last Kids on Earth. Max lives in Los Angeles with his wife and daughter. Visit him at MaxBrallier.com.