The Lost Causes of Bleak Creek - by Rhett McLaughlin (Paperback) 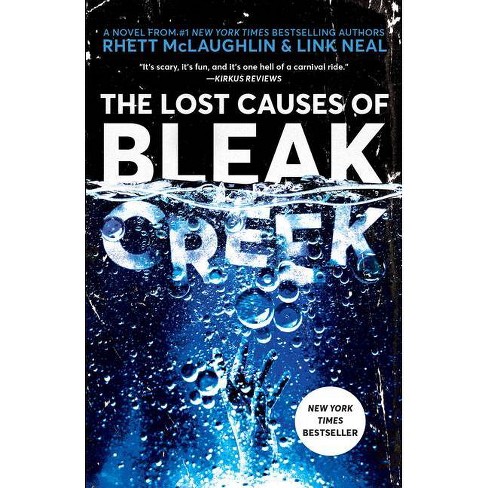 From the authors of the #1 New York Times-bestseller Rhett & Link's Book of Mythicality and creators of Good Mythical Morning, a thrilling and darkly funny novel about two best friends fighting the sinister forces at the heart of their Southern town.

From the authors of Rhett & Link's Book of Mythicality and creators of Good Mythical Morning . . . It's 1992 in Bleak Creek, North Carolina--a sleepy little place with all the trappings of an ordinary Southern town: two Baptist churches, friendly smiles coupled with silent judgments, and an unquenchable appetite for pork products. Beneath the town's cheerful façade, however, Bleak Creek teens live in constant fear of being sent to the Whitewood School, a local reformatory with a history of putting unruly youths back on the straight and narrow--a record so impeccable that almost everyone is willing to ignore the suspicious deaths that have occurred there over the past decade. At first, high school freshmen Rex McClendon and Leif Nelson believe what they've been told: that the students' strange demises were all just tragic accidents, the unfortunate consequence of succumbing to vices like Marlboro Lights and Nirvana. But when the shoot for their low-budget horror masterpiece, PolterDog, goes horribly awry--and their best friend, Alicia Boykins, is sent to Whitewood as punishment--Rex and Leif are forced to question everything they know about their unassuming hometown and its cherished school for delinquents. Eager to rescue their friend, Rex and Leif pair up with recent NYU film school graduate Janine Blitstein to begin piecing together the unsettling truth of the school and its mysterious founder, Wayne Whitewood. What they find will leave them battling an evil beyond their wildest imaginations--one that will shake Bleak Creek to its core. Praise for The Lost Causes of Bleak Creek "The Lost Causes of Bleak Creek is like your best friend from high school--kind of weird and a little twisted, but no matter how much trouble they caused, they always made you laugh. You don't have to be a GMM fan to realize . . . The Lost Causes of Bleak Creek, Will It Awesome Book? F@*# yeah!"--Kurt Sutter, creator of Sons of Anarchy "Most people don't read books, let alone write them. That puts Rhett and Link in the top 1% of smart people in the world. Read this book."--Rachel Bloom, co-creator of Crazy Ex-Girlfriend "It's scary, it's fun, and it's one hell of a carnival ride."--Kirkus Reviews

"Rhett McLaughlin and Link Neal conjure up a heady brew of hilarity, friendship, and dark forces in the small-town South, where being the funny, smart kids might just end up as the fight of your life. Fans of John Green and Stranger Things take note."--Gwenda Bond, New York Times bestselling author of Stranger Things: Suspicious Minds "I cannot think of a more exciting novel to read--and share with my sons--than The Lost Causes of Bleak Creek! Thank you, Rhett and Link, for this gem about friendship, courage, and adventure, which is touched by your humor, wit, and intelligence with each twist and turn!"--Mayim Bialik, New York Times bestselling author of Boying Up

"I tore through all 324 pages of this book in one sitting--and I still didn't want it to end! I would have been willing to read as many as 325 pages, or possibly even 326. Though if I'm being totally honest, they probably could have stopped at 323. Either way, I loved this creative book."--Jimmy Fallon, host of The Tonight Show Starring Jimmy Fallon

"The Lost Causes of Bleak Creek reminded me, lovingly and longingly, of films like The Goonies or The Lost Boys--those kind of throwback narratives that make you recall what it was like to be a kid: the close friendships, that strange and needful breed of fear you only feel at that age, and the looming threat of adulthood lurking at the periphery. If, like me, you believe there's a power vested in books that can take you back in time, then this book is its own little power plant."--Craig Davidson, author of The Saturday Night Ghost Club "An entertaining narrative . . . Brimming with 1990s cultural references ranging from New Kids on the Block to Hypercolor t-shirts, the story is funny, spooky, and at times terrifying."-Booklist

Rhett McLaughlin and Link Neal, raised in North Carolina and best friends since the first grade, are a comedy duo known for creating the Internet's most-watched daily talk show, Good Mythical Morning; their award-winning weekly podcast Ear Biscuits; and the instant #1 New York Times bestseller Rhett & Link's Book of Mythicality. They share an office at Mythical Entertainment, the company they cofounded, but live separately with their respective wives, children, and dogs in Los Angeles.
If the item details above aren’t accurate or complete, we want to know about it. Report incorrect product info.