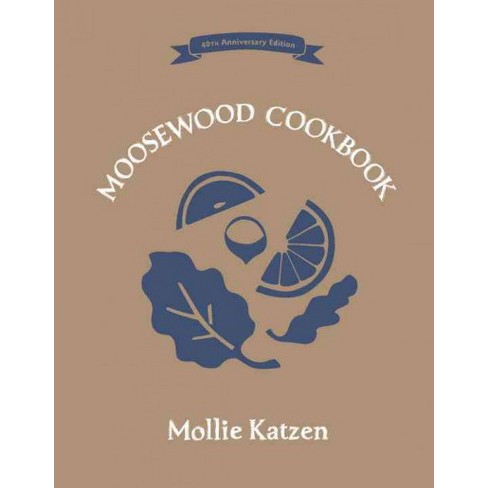 Among the most influential cookbooks of our time, the Moosewood Cookbook is such a powerful symbol that the publishers were tempted not to tamper wi th it. But times have changed, and knowledge about the foods we eat and their nutritional value has increased. So, after many inquiries and requests, the author has revised many of her recipes to be lighter and healthier. Illustrated.

The Moosewood Cookbook has inspired generations to cook simple, healthy, and seasonal food. A classic listed as one of the top ten best-selling cookbooks of all time by the New York Times, this 40th anniversary edition of Mollie Katzen's seminal book will be a treasured addition to the cookbook libraries of fans young and old. In 1974, Mollie Katzen hand-wrote, illustrated, and locally published a spiral-bound notebook of recipes for vegetarian dishes inspired by those she and fellow cooks served at their small restaurant co-op in Ithaca, NY. Several iterations and millions of copies later, the Moosewood Cookbook has become one of the most influential and beloved cookbooks of all time--inducted into the James Beard Award Cookbook Hall of Fame, and coined a Cookbook Classic by the International Association of Culinary Professionals. Mollie's Moosewood Cookbook has inspired generations to fall in love with plant-based home cooking, and, on the fortieth anniversary of that initial booklet, continues to be a seminal, timely, and wholly personal work. With a new introduction by Mollie, this commemorative edition will be a cornerstone for any cookbook collection that long-time fans and those just discovering Moosewood will treasure.

MOLLIE KATZEN is the best-selling author of twelve books. With more than six million books in print, Katzen is largely credited with moving plant-based cuisine from the fringe to the center of the American dinner plate, and was named by Health magazine as one of The Five Women Who Changed the Way We Eat. Katzen is a charter member of the Harvard School of Public Health Nutrition Roundtable and is an inaugural honoree of the Natural Health Hall of Fame.
If the item details above aren’t accurate or complete, we want to know about it. Report incorrect product info.