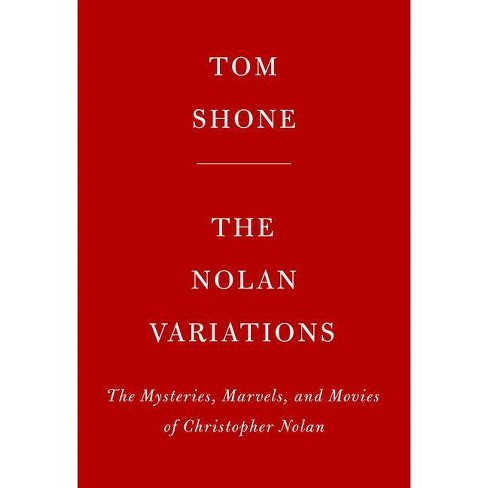 "This is a Borzoi book"--Copyright page.

An in-depth look at Christopher Nolan, considered to be the most profound, commercially successful director at work today, written with his full cooperation. A rare, revelatory portrait, as close as you're ever going to get to the Escher drawing that is Christopher Nolan's remarkable brain (Sam Mendes).

In chapters structured by themes and motifs (Time; Chaos; Dreams), Shone offers an unprecedented intimate view of the director. Shone explores Nolan's thoughts on his influences, his vision, his enigmatic childhood past--and his movies, from plots and emotion to identity and perception, including his latest blockbuster, the action-thriller/spy-fi Tenet (Big, brashly beautiful, grandiosely enjoyable--Variety).

Filled with the director's never-before-seen photographs, storyboards, and scene sketches, here is Nolan on the evolution of his pictures, and the writers, artists, directors, and thinkers who have inspired and informed his films. Fabulous: intelligent, illuminating, rigorous, and highly readable. The very model of what a filmmaking study should be. Essential reading for anyone who cares about Nolan or about film for that matter.--Neal Gabler, author of An Empire of Their Own: How the Jews Invented Hollywood and Walt Disney, The Biography

This is the book for which Christopher Nolan's many admirers have long been waiting ... Shone sat with Nolan for numerous conversations over three years, producing what is almost a coauthored exploration of Nolan's creative process, his extensive influences, and his films ... Shone seamlessly weaves these conversations within a narrative that stretches from Nolan's formative boarding school days in England to the evolution of his career and work ... a thoroughly entertaining and fascinating portrait. For the foreseeable future, this is the definitive word on Nolan and a must for film buffs.--Library Journal (starred review)

Nolan is a wonderfully unlikely contemporary filmmaker. We're fortunate indeed to have him, and fortunate now to have this book.--William Gibson

Drawing on interviews conducted over three years, film critic Shone shines a light on Christopher Nolan, who has 'long perfected the art of talking about his films while giving away nothing about himself.' Shone devotes a chapter to each of Nolan's films [and] provides thoughtful context for Nolan's commentary.--Publishers Weekly

An up-close and personal look at one of Hollywood's most successful directors ... unique access to the 'most successful filmmaker to come out of the British Isles since Alfred Hitchcock.' This erudite book is packed with extensive, expansive discussions about Nolan's films, all written or co-written by the director; insight into what he was trying to accomplish with each film; methodologies; and the movies, directors, books, art, architecture, and music that influenced him ... revealing ... invaluable.--Kirkus (starred review)

TOM SHONE was the film critic of the Sunday Times from 1994 until he moved to New York in 1999. He is the author of five books, including Tarantino: A Retrospective and Martin Scorsese: A Retrospective. His writing has appeared in The New Yorker, The New York Times, the Times Literary Supplement, Intelligent Life, and Vogue. He currently teaches film history and criticism at New York University.
If the item details above aren’t accurate or complete, we want to know about it. Report incorrect product info.