The One and Only Sparkella - by Channing Tatum (Hardcover) 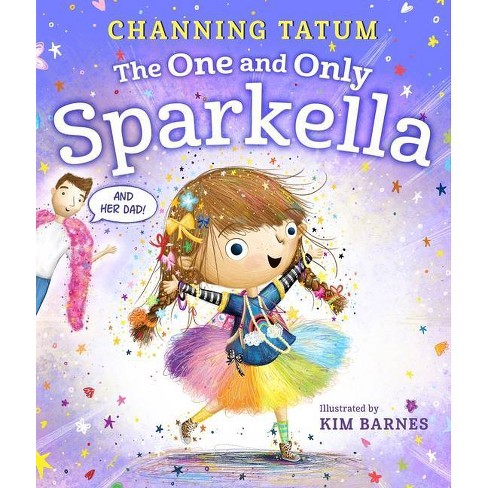 In this debut picture book from leading actor, producer and director Channing Tatum, a unique little girl has trouble fitting in at her new school, so her dad steps in to show her the importance to stay true to herself.

Leading actor, producer and director Channing Tatum's picture book debut, The One and Only Sparkella is a charming ode to self-esteem and the love between a father and daughter--illustrated by Kim Barnes.

Ella is excited for her first day at a new school. Glimmering pencil case? Check! Shimmering backpack? Check! Glittery ribbons in her hair? Check! She can't wait to meet the other kids and share her sparkly personality. But her first day doesn't go quite as planned: Her new classmates don't like her disco-ball shoes, her PB&J-with-sprinkles sandwich, or her rainbow-y unicorn painting. Ella decides to try to be less sparkly at school the next day so the other kids won't make fun of her. But with a little help from her dad, she soon learns the importance of just being herself, no matter what other people say.

Channing Tatum has established himself as a leading actor, producer and now director with his debut film, Dog, which he is co-directing with his production partner, Reid Carolin. Together they founded their production company Free Association along with Peter Kiernan. Free Association has produced the 21 Jump Street and Magic Mike franchises. They also produce the worldwide stage experience, Magic Mike Live, which premiered in Las Vegas and expanded to London, Berlin and Australia. However, his favorite role to date is being father to his six-year-old daughter, Everly, who loves sparkly, rainbow-y things. He currently resides in Los Angeles.

Kim Barnes lives on the Isle of Wight with her partner and two children, Leo and Cameo, who greatly inspire her work. She graduated from Lincoln University, England, and has drawn ever since she was a young child.
If the item details above aren’t accurate or complete, we want to know about it. Report incorrect product info.