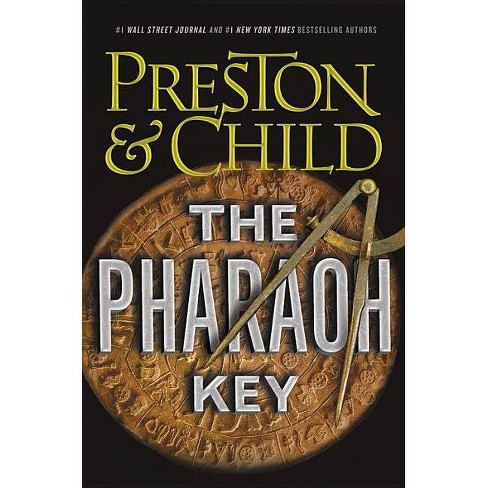 When his former employer goes missing, Gideon Crew, reeling from his terminal diagnosis, pursues the long-awaited translation of the Phaistos Disc, an ancient tablet that could end or save his life.

Don't miss the this exciting, New York Times bestselling adventure from Preston & Child, in which the secrets of a mysterious ancient tablet may point the way to untold treasure--or unspeakable danger.
"I just want to be crystal clear about this: if it has value, we're gonna steal it. Are you with me?"Effective Engineering Solutions has been inexplicably shut down and the head of the company, Eli Glinn, has all but vanished. Fresh off a diagnosis that gives him only months to live, Gideon Crew is contacted by one of his coworkers at EES, Manuel Garza, who tells him the two have mere hours to collect their belongings before the office closes forever. After years of dedicated service and several high-risk missions, theirs seems like the most ignoble of terminations-until Gideon and Garza happen upon an incredible discovery.After centuries of silence, a code-breaking machine at EES has cracked the long-awaited translation of a centuries-old stone tablet, the Phaistos Disc, that dates back to an otherwise completely unknown, ancient civilization. The mysteries of the message itself hint at incredible treasures, and perhaps even a world-altering secret. No one remains at EES to take on this most remarkable mission but Gideon and Garza. The two agree to solve the mystery of the disc's message and split the spoils: the perfect parting gift their employer doesn't know he has given.What lies at the end of the trail may save Gideon's life-or bring it to a sudden, shocking close. As Gideon and Garza soon discover, some missions are more dangerous than others. But as Gideon has proved again and again, there's no such thing as too great a risk when you're living on borrowed time.

"Entertaining...Fans of the Indiana Jones movies will find plenty to like." --Publishers Weekly

"One wild, series-ending adventure.... cleverly plotted...This is a great cap on the series." --Kirkus (Starred Review)

The eponymous Gideon Crew would be equally comfortable smack in a Ludlum tempest or striding onto the set of the Ocean's Eleven franchise. Preston and Child have crafted an electrifying, riveting thriller on which I could continue to heap praise, but instead I will just offer this: Read the book! And we can all look forward to the next appearance of Mr. Gideon Crew in the not-so-distant future."--David Baldacci, on Gideon's Sword

"As always with this team, Preston & Child have done their homework and taken a very interesting relic in order to produce, once again, a story that will have readers thrilled and excited and begging (still) for more of their creations to come as fast as possible."
--Amy Lignor, Suspense Magazine

"Look up adventure in the dictionary and you're likely to find a picture of Doug Preston and Lincoln Child for reasons that are all on display in 'The Pharaoh Key'....This is lightning-paced, action-thriller writing of the highest order, a throwback to the best of Alistair MacLean and reminiscent of James Rollins and Brad Meltzer at their best."--Providence Sunday Journal

"[THE PHARAOH KEY] invokes classic adventure novels from the early 20th century. Mystery after mystery builds into a finale that even savvy readers won't see coming. If this truly is the last Gideon Crew novel, the authors have ended his escapades in grand style; fans will rejoice and newcomers will appreciate the sheer scope of everything."--The Associated Press

"Preston and Child have been in the business of keeping secrets for years now and simply no one's better at knowing just how long to keep them... wildly entertaining and lightening paced... impossible to put down."
--Providence Sunday Journal, on THE LOST ISLAND

PRAISE FOR THE GIDEON CREW SERIES: "Preston & Child take all of the various elements from classic horror and sci-fi films and novels and spin them together to write what begins as an action adventure, but soon delves into paranoid terror ... scary good fun."--Associated Press, on BEYOND THE ICE LIMIT

The thrillers of Douglas Preston and Lincoln Child "stand head and shoulders above their rivals" (Publishers Weekly). Preston and Child's Relic and The Cabinet of Curiosities were chosen by readers in a National Public Radio poll as being among the one hundred greatest thrillers ever written, and Relic was made into a number-one box office hit movie. They are coauthors of the famed Pendergast series and their recent novels include Fever Dream, Cold Vengeance, Two Graves, and Gideon's Corpse. In addition to his novels, Preston writes about archaeology for the New Yorker and Smithsonian magazines. Lincoln Child is a former book editor who has published five novels of his own, including the huge bestseller Deep Storm.
Readers can sign up for The Pendergast File, a monthly "strangely entertaining note" from the authors, at their website, www.PrestonChild.com. The authors welcome visitors to their alarmingly active Facebook page, where they post regularly.
If the item details above aren’t accurate or complete, we want to know about it. Report incorrect product info.