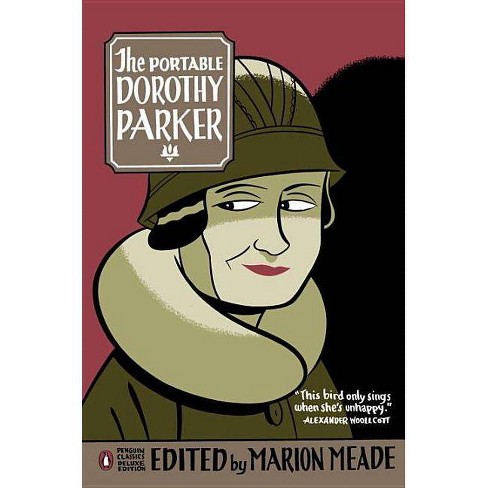 The second revision in 60 years, this sublime collection ranges over the verse, stories, essays, and journalism of one of the 20th century's most quotable authors.

The second revision in sixty years, this sublime collection ranges over the verse, stories, essays, and journalism of one of the twentieth century's most quotable authors.

In this new twenty-first-century edition, devoted admirers will be sure to find their favorite verse and stories. But a variety of fresh material has also been added to create a fuller, more authentic picture of her life's work. At the heart of her serious work lie her political writings dealing with race, labor, and international politics. A Dorothy Parker Sampler blends the sublime and the silly with the terrifying, a sort of tasting menu of verse, stories, essays, political journalism, a speech on writing, plus a catchy off-the-cuff rhyme she never thought to write down.

The introduction of two new sections is intended to provide the richest possible sense of Parker herself. Self-Portrait reprints an interview she did in 1956 with The Paris Review, part of a famed ongoing series of conversations (Writers at Work) conducted with the best of twentieth-century writers. Letters: 1905-1962, which might be subtitled Mrs. Parker Completely Uncensored, presents correspondence written over the period of a half century, beginning in 1905 when twelve-year-old Dottie wrote her father during a summer vacation on Long Island, and concluding with a 1962 missive from Hollywood describing her fondness for Marilyn Monroe. Features an introduction by Marion Meade and cover illustrations by renowned graphic artist Seth, creator of the comic series Palooka-ville For more than seventy years, Penguin has been the leading publisher of classic literature in the English-speaking world. With more than 1,700 titles, Penguin Classics represents a global bookshelf of the best works throughout history and across genres and disciplines. Readers trust the series to provide authoritative texts enhanced by introductions and notes by distinguished scholars and contemporary authors, as well as up-to-date translations by award-winning translators.

Dorothy Parker was born in West End, New Jersey, in 1893 and grew up in New York, attending a Catholic convent school and Miss Dana's School in Morristown, New Jersey. In 1916 she sold some of her poetry to the editor of Vogue, and was subsequently given an editorial position on the magazine, writing captions for fashion photographs and drawings. She then became drama critic of Vanity Fair and the central figure of the celebrated Algonquin Round Table.

Famous for her spoken wit, she showed the same trenchant commentary in her book reviews for The New Yorker and Esquire and in her poems and sketches. Her collection of poems included Not So Deep as a Well and Enough Rope, which became a bestseller; and her collections of stories included Here Lies. She also collaborated with Elmer Rice on a play, Close Harmony and with Arnaud d'Usseau on the play the Ladies of the Corridor. She herself had two Broadway plays written about her and was portrayed as a character in a third. Her cynicism and the concentration of her judgements were famous and she has been closely associated with modern urbane humour.

Her first husband was Edwin Pond Parker II, and although they were divorced some years later, she continued to use his name, which she much preferred to her own of Rothschild. Her second husband was an actor-writer Alan Campbell. They went to Hollywood as a writing team and went through a tempestuous marriage until his death in 1963, when Dorothy Parker returned to New York. She died in 1967.

Marion Meade is the author of Dorothy Parker: What Fresh Hell Is This? and Bobbed Hair and Bathtub Gin: Writers Running Wild in the Twenties. She has also written biographies of Woody Allen, Buster Keaton, Eleanor of Aquitaine, Victoria Woodhull, and Madame Blavatsky, as well as two novels about medieval France.

Seth is an illustrator whose work has been featured in such publications as the Washington Post, Details, Spin, and the New York Times. He is best known for his continuing comic book series Palooka-Ville.