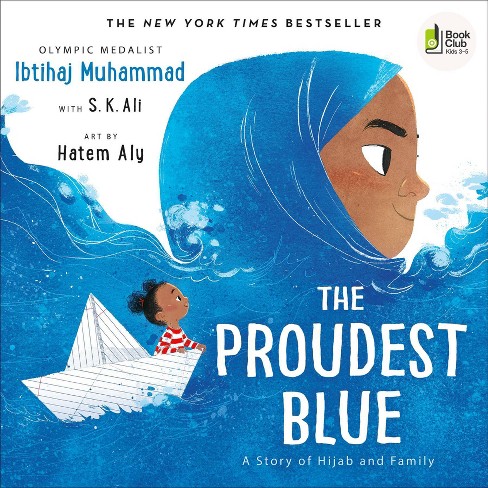 Faizah relates how she feels on the first day her sister, sixth-grader Asiya, wears a hijab to school.

THE INSTANT NEW YORK TIMES BESTSELLER! A powerful, vibrantly illustrated story about the first day of school--and two sisters on one's first day of hijab--by Olympic medalist and social justice activist Ibtihaj Muhammad. With her new backpack and light-up shoes, Faizah knows the first day of school is going to be special. It's the start of a brand new year and, best of all, it's her older sister Asiya's first day of hijab--a hijab of beautiful blue fabric, like the ocean waving to the sky. But not everyone sees hijab as beautiful, and in the face of hurtful, confusing words, Faizah will find new ways to be strong. Paired with Hatem Aly's beautiful, whimsical art, Olympic medalist Ibtihaj Muhammad and Morris Award finalist S.K. Ali bring readers an uplifting, universal story of new experiences, the unbreakable bond between siblings, and of being proud of who you are.

Praise for The Proudest Blue: Inspiring... The lovely, playful illustrations by Aly capture the spirit of imagination and sisterly solidarity in the face of bullying.--New York Times Book Review

* Aly's ink-wash-and-pencil illustrations settle and soar along with the language.... This story, as both window and mirror, inevitably educates, but more important, it encourages pride in and respect for hijab through a tale of two sisters, their bond strengthened by faith.--Booklist, starred review

* This excellent story about identity, visibility, and confidence, touches on rites of passage, bonds between sisters, and bullying and is unapologetic in tackling misconceptions and demanding equality.--School Library Journal, starred review

Ibtihaj Muhammad is a fencer and the first Muslim American woman in hijab to compete for the United States in the Olympic Games. She is also the first female Muslim American to medal at the Olympic Games, winning bronze in the women's saber team event. An activist, speaker, and entrepreneur, Ibtihaj has written a memoir, Proud, and inspired the first hijabi Barbie in her likeness. She invites you to visit her online at ibtihajmuhammad.com.
S. K. Ali is the award-winning author of Saints and Misfits and Love from A to Z and the coeditor of an upcoming Eid anthology. Like Faizah and Asiya, she and her sister visited hijab shops every year before the first day of school to choose their proudest colors. Hatem Aly is an Egyptian-born illustrator whose work has been featured on television and in multiple publications worldwide. Among other books, he illustrated Newbery Honor winning novel The Inquisitor's Tale by Adam Gidwitz. He currently lives in New Brunswick, Canada, with his wife, son, and more pets than people.
Target Book Club
Book selected for Target Book Club Picks
If the item details above aren’t accurate or complete, we want to know about it.

Eyes That Speak to the Stars - by Joanna Ho (Hardcover)

Where the Wild Things Are (Paperback) by Maurice Sendak

We Are Water Protectors - by Carole Lindstrom (Hardcover)

The Door of No Return - by Kwame Alexander (Hardcover)

5 out of 5 stars
Would recommend
Sam - 17 days ago, Verified purchaser
A beautiful story with a great message. It’s nice to read about diverse perspectives and show our kids what it means to be truly inclusive.
Did you find this review helpful?

5 out of 5 stars
Would recommend
Sarah89 - 8 months ago, Verified purchaser
Great read. Inspiring!
1 guest found this review helpful. Did you?

5 out of 5 stars
Would recommend
Andy - 8 months ago, Verified purchaser
Some of the best lines I’ve ever read in a children’s book
1 guest found this review helpful. Did you?

5 out of 5 stars
Would recommend
Shayzay - 1 year ago, Verified purchaser
Beautiful, necessary book. Will gift it to many, young and older girls, who need to hear this message of acceptance and pride which they can embrace as they wear their hijab and hold their heads up. Planning on gifting this book with a blue hijab!
6 guests found this review helpful. Did you?

5 out of 5 stars
Would recommend
Anon56 - 1 year ago, Verified purchaser
Absolutely love this book! Great for encouraging pride in one’s religion and beliefs. Great for Muslim and non-Muslim children alike. Makes them proud of who they are. So grateful for this representation.
7 guests found this review helpful. Did you?

5 out of 5 stars
Would recommend
Mommmmy3 - 2 years ago
I ordered 3 of those, 1 for my kids , 2 to give to kids’ classes as gifts, introduce them to Muslim kids & life. It’s also great for talking about bullying, how to deal with it & stand tall while staying true to your values. My kids enjoyed it as well as the teachers who read it in their classrooms, they were very appreciative! Written by an African American Muslim Olympic Medalist, Ibtihaj Muhammad, she did an amazing job!
13 guests found this review helpful. Did you?