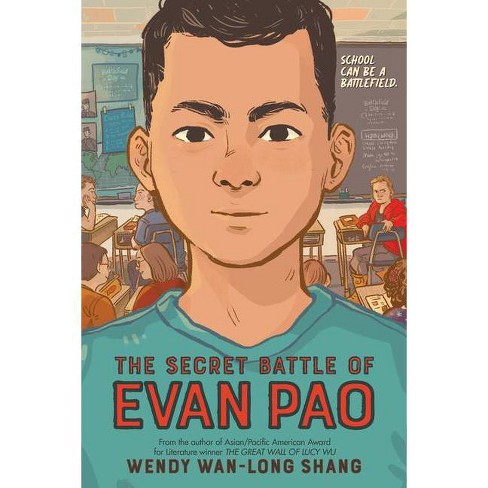 Middle school can be a battlefield... From award-winning author Wendy Wan-Long Shang comes a poignant and timely take on prejudice, bullying, and claiming our own histories, perfect for fans of Front Desk.

A fresh start. That's all Evan Pao wants as he, along with his mother and sister, flee from California to Haddington, Virginia, hoping to keep his father's notoriety a secret.

But Haddington is a southern town steeped in tradition, and moving to a town immersed in the past has its own price. Although Evan quickly makes friends, one boy, Brady Griggs, seems determined to make sure that as a Chinese American, Evan feels that he does not belong. When Evan finds a unique way to make himself part of the school's annual Civil War celebration, the reaction is swift and violent. As all of his choices at home and at school collide, Evan must decide whether he will react with the same cruelty shown to him, or choose a different path.

Wendy Wan-Long Shang, the critically acclaimed author of Asian/Pacific American Librarians Association Award for Children's Literature winner The Great Wall of Lucy Wu, weaves a timely and deeply moving portrait of all the secret battles Evan Pao must fight as he struggles to figure out how he fits into this country's past and how he will shape its future.

Praise for Not Your All-American Girl, cowritten with Madelyn Rosenberg:

Lauren's story is a sensitive and realistic portrayal of a girl who struggles to find her place in a community where very few people look like her... this is a funny, tender, quick-moving story of family, friendship, identity, and music. -- School Library Journal

While focusing on serious themes (racism and prejudice), the overall tone remains light, and several scenes (including Lauren's disastrous attempt to lighten her black hair, resulting in orange stripes) will elicit laughter. -- Booklist

Praise for This Is Just a Test, cowritten with Madelyn Rosenberg:

CBC Book of the Year Finalist

For a book about the possible end of the world, Rosenberg and Shang keep the tone surprisingly light. . . . The dialogue is snappy and the plot fast-paced. -- The New York Times Book Review

* It's refreshing to meet a male protagonist who, like Tara in Paula Freedman's My Basmati Bat Mitzvah, is struggling with how to be authentically Jewish in a bicultural family.... Giggle-inducing, light, and charmingly realistic fiction that will resonate with a wide variety of readers. -- School Library Journal, starred review

There's a lot to enjoy, but it's David's relationships with his two grandmothers that steal the show, especially when the rivals eventually unite to teach him he's not 'half of each' but 'all of both.' A nostalgic and heartwarming period coming-of-age comedy. -- Kirkus Reviews

A journey filled with humor, emotional depth, and important realizations about what it means to be a friend and to embrace multiple cultures. His struggle to make sense of the Cold War will resonate with readers grappling with a confusing political climate themselves. -- Publishers Weekly

This novel tackles the very difficult topic of understanding who you are while appreciating your background and differences . . . In today's society, where families come in diverse variations and many children are growing up biracial and/or multiethnic, plenty of readers will find relevance to their lives in this middle-grade novel. -- School Library Connection

The first-person narrative engages readers with David's candid reflections as well as his droll telling of events. -- Booklist

Rosenberg and Shang keep the plot episodic and light, allowing David's feuding grandmothers to upstage the kids in many of the acts... Underpinning the domestic comedy is respect for fears that transcend generations. -- Bulletin of the Center for Children's Books

[A] seamless collaboration by two truly gifted writers [and] a perfect read for summer and beyond. -- Christian Science Monitor

Rosenberg and Shang infuse this story with humor, tenderness and a genuine examination of what it means to grow up caught between cultures. -- Richmond Times-Dispatch

Sure to hold a reader's interest and filled with humor. -- Jewish Book Council

This is the funniest middle-grade novel I read this year. . . . Everything about this book is satisfying. -- Tablet Magazine

A delightfully told story of competing sides in a tug-o-war/give-and-take battle, showing the reader that even 12-year-old seventh graders have a lot to deal with, whether it be on a grand scale such as international relations or on a smaller scale of balancing new and old friendships. -- Compass Book Ratings

Rosenberg and Shang's warm, mostly realistic handling of David's multicultural family speaks for their comprehensive understanding of the struggles of identity they depict, and makes David a unique and relatable role model of a character. -- International Examiner

A BookPage Best of the Year selection

* [A] fine story of family, loss, growing up and learning to play baseball, raised to a higher level by gracefully incorporated themes of feminism and kindness. -- Kirkus Reviews, starred review

* Shang (The Great Wall of Lucy Wu) skillfully balances the different aspects of Peter's life, robustly characterizing his friendships and his time at school and home. Issues of sexism, racism, and struggles with depression are handled deftly in scenarios grounded in reality, including an ending that's hopeful without being pat. -- Publishers Weekly, starred review

Readers will cheer Peter on as his love for his family drives him to persevere at home and on the field. Parallels between home plate and home as place abound as grief completes its work and relationships are restored. Interwoven with cultural ties to both Peter's Chinese heritage and to the women's liberation movement, this touching novel shows the importance of patience -- baseball. -- Booklist

Praise for The Great Wall of Lucy Wu:

A delightful story about assimilation and family dynamics . . . sure to appeal to young readers struggling with issues of self-identity, whatever their heritage. -- Los Angeles Times

A realistic and amusing portrait of family dynamics, heritage, and the challenge of feeling like an outsider. -- Publishers Weekly

A unique look at the power of family. -- Discovery Girls Magazine

Wendy Wan-Long Shang is the author of The Great Wall of Lucy Wu, which was awarded the Asian/Pacific American Award for Children's Literature; The Way Home Looks Now, an Amelia Bloomer Project List selection and a CCBC Choices List selection; Sydney Taylor Honor Book This Is Just a Test, which she cowrote with Madelyn Rosenberg; and Not Your All-American Girl, a Tablet Magazine Best Children's Book, also cowritten with Madelyn Rosenberg. She lives with her family in the suburbs of Washington, DC.
If the item details above aren’t accurate or complete, we want to know about it. Report incorrect product info.