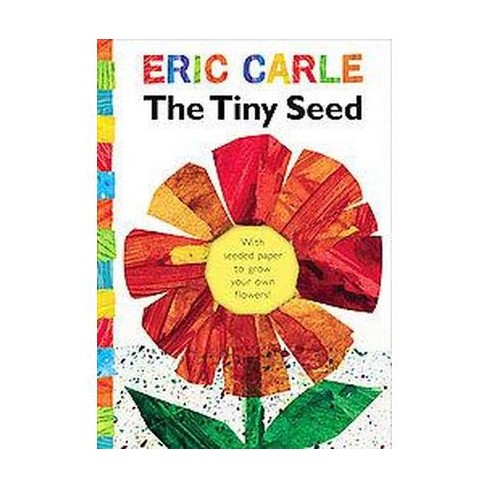 With his inimitable bright collage art and simple text, Carle follows the journey of a seed, from being blown by the wind to taking root and sprouting seeds of its own. Full color.

Eric Carle's classic story of the life cycle of a flower is told through the adventures of a tiny seed. This mini-book includes a piece of detachable seed-embedded paper housed on the inside front cover. Readers can plant the entire piece of paper and watch as their very own tiny seeds grow into beautiful wildflowers.

In autumn, a strong wind blows flower seeds high in the air and carries them far across the land. One by one, many of the seeds are lost -- burned by the sun, fallen into the ocean, eaten by a bird. But some survive the long winter and, come spring, sprout into plants, facing new dangers -- trampled by playing children, picked as a gift for a friend. Soon only the tiniest seed remains, growing into a giant flower and, when autumn returns, sending its own seeds into the wind to start the process over again.

Eric Carle is an internationally bestselling and award-winning author and illustrator of more than seventy books for very young children, including The Tiny Seed, Papa, Please Get the Moon for Me, and his most well-known title, The Very Hungry Caterpillar. Born in Syracuse, New York, Eric Carle moved to Germany with his parents when he was six years old. He studied at the prestigious art school, the Akademie der Bildenden Künste, in Stuttgart, before returning to the United States, where he worked as a graphic designer for The New York Times and later as art director for an advertising agency. The Very Hungry Caterpillar, now considered a modern classic, has sold nearly fifty million copies and has been translated into sixty-five languages. With his late wife, Barbara, Eric Carle cofounded The Eric Carle Museum of Picture Book Art in Amherst, Massachusetts in 2002. Eric Carle lives in the Florida Keys.
If the item details above aren’t accurate or complete, we want to know about it. Report incorrect product info.