The Violin Conspiracy - by Brendan Slocumb 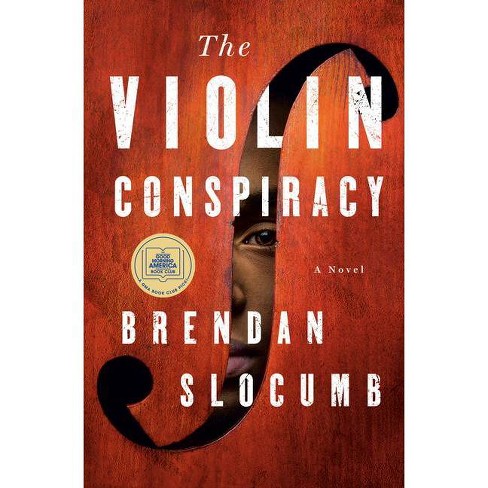 "Ray McMillian loves playing the violin more than anything, and nothing will stop him from pursuing his dream of becoming a professional musician. Not his mother, who thinks he should get a real job, not the fact that he can't afford a high-caliber violin, not the racism inherent in the classical music world. And when he makes the startling discovery that his great-grandfather's fiddle is actually a priceless Stradivarius, his star begins to rise. Then with the international Tchaikovsky Competition-the Olympics of classical music-fast approaching, his prized family heirloom is stolen. Ray is determined to get it back. But now his family and the descendants of the man who once enslaved Ray's great-grandfather are each claiming that the violin belongs to them. With the odds stacked against him and the pressure mounting, will Ray ever see his beloved violin again?"--

A riveting page-turner about a Black classical musician's desperate quest to recover his lost violin on the eve of the most prestigious musical competition in the world "Utterly original and downright gripping." --Zakiya Dalila Harris, New York Times bestselling author of The Other Black Girl Growing up Black in rural North Carolina, Ray McMillian's life is already mapped out. If he's lucky, he'll get a job at the hospital cafeteria. If he's extra lucky, he'll earn more than minimum wage. But Ray has a gift and a dream--he's determined to become a world-class professional violinist, and nothing will stand in his way. Not his mother, who wants him to stop making such a racket; not the fact that he can't afford a violin suitable to his talents; not even the racism inherent in the world of classical music. When he discovers that his great-great-grandfather's beat-up old fiddle is actually a priceless Stradivarius, all his dreams suddenly seem within reach. Together, Ray and his violin take the world by storm. But on the eve of the renowned and cutthroat Tchaikovsky Competition--the Olympics of classical music--the violin is stolen, a ransom note for five million dollars left in its place. Ray will have to piece together the clues to recover his treasured Strad . . . before it's too late. With the descendants of the man who once enslaved Ray's great-great-grandfather asserting that the instrument is rightfully theirs, and with his family staking their own claim, Ray doesn't know who he can trust--or whether he will ever see his beloved violin again.

"Utterly original and downright gripping, The Violin Conspiracy is more than a mystery--it's an unflinching peek into the heart and soul of a gifted Black violinist striving to pursue his passion in the face of adversity. Brendan Slocumb's debut is an essential lesson in artistry, prejudice, and persistence."
--Zakiya Dalila Harris, New York Times bestselling author of The Other Black Girl "I loved The Violin Conspiracy for exactly the same reasons I loved The Queen's Gambit a surprising, beautifully rendered underdog hero I cared about deeply and a fascinating, cutthroat world I knew nothing about--in this case, classical music. I devoured this fine novel: every page and every word. And that ending? Never saw it coming."
--Chris Bohjalian, #1 New York Times bestselling author of The Flight Attendant and Hour of the Witch "Finally, classical music gets the complex treatment it deserves. A wide-eyed look at the art form and its discontents.
--Gary Shteyngart, New York Times bestselling author of Little Failure and Lake Success Magnificent, from the first page to the last, the pace never slackens. It is a gorgeous read. Old violins, international music competitions, human greed, determination, decency--all of these feature in this first-rate novel. The reader will learn about how difficult it is to get anywhere in the world of classical music if your face doesn't fit the prejudiced expectations of some people. All of that is here, and it is all related with dignity, humour and forbearance. It's a wonderful tale by a very fine author who happens to know a lot about music.
--Alexander McCall Smith, bestselling author of the No. 1 Ladies' Detective Agency series "The Violin Conspiracy reminds all of us that dreams are worth pursuing, no matter the obstacles in front of us. The struggle to follow your heart is always the same--and this novel inspires us to take the chance, make the leap, and dare to be better. This was a wonderful read."
--Misty Copeland, New York Times bestselling author of Life in Motion and principal dancer, American Ballet Theatre

Brendan Nicholaus Slocumb was raised in Fayetteville, North Carolina, and holds a degree in music education (with concentrations in violin and viola) from the University of North Carolina at Greensboro. For more than twenty years he has been a public and private school music educator and has performed with orchestras throughout Northern Virginia, Maryland, and Washington, DC. He is currently working on his second novel.
If the item details above aren’t accurate or complete, we want to know about it.

In the Shade of Olive Trees - by Kate Laack

5 out of 5 stars
Would recommend
wvcollins - 7 months ago, Verified purchaser
Excellent debut novel!
Did you find this review helpful?