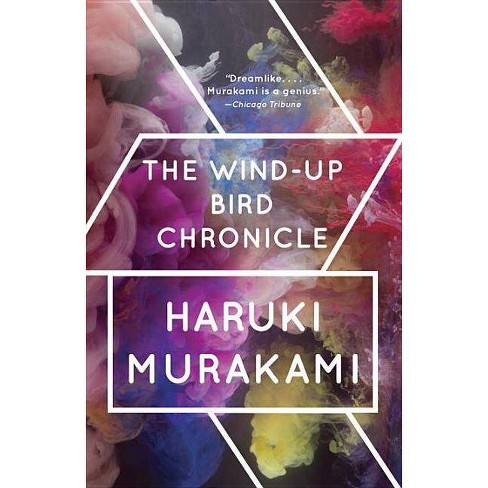 "Magnificent. . . .(Murakami) has taken a pre-millennial swing for the fences a la David Foster Wallace and Don DeLillo" ("Newsweek"). "A surreal, sprawling drama . . . that marks . . . Murakami's most ambitious work to date".--"Publishers Weekly".

The Wind-Up Bird Chronicle is a tour de force--and one of Haruki Murakami's most acclaimed and beloved novels. In a Tokyo suburb, a young man named Toru Okada searches for his wife's missing cat--and then for his wife as well--in a netherworld beneath the city's placid surface. As these searches intersect, he encounters a bizarre group of allies and antagonists. Gripping, prophetic, and suffused with comedy and menace, this is an astonishingly imaginative detective story, an account of a disintegrating marriage, and an excavation of the buried secrets from Japan's forgotten campaign in Manchuria during World War II.

"Dreamlike and compelling. . . . Murakami is a genius." --Chicago Tribune "Mesmerizing. . . . Murakami's most ambitious attempt yet to stuff all of modern Japan into a single fictional edifice." --The Washington Post Book World "A significant advance in Murakami's art . . . a bold and generous book." --The New York Times Book Review "A stunning work of art . . . that bears no comparisons." --New York Observer "With The Wind-Up Bird Chronicle, Murakami spreads his brilliant, fantastical wings and soars." --Philadelphia Inquirer "Seductive. . . . A labyrinth designed by a master, at once familiar and irresistibly strange." --San Francisco Chronicle "An epic . . . as sculpted and implacable as a bird by Brancusi." --New York Magazine "Mesmerizing, original . . . fascinating, daring, mysterious and profoundly rewarding." --Baltimore Sun "A beguiling sense of mystery suffuses The Wind-Up Bird Chronicle and draws us irresistibly and ever deeper into the phantasmagoria of pain and memory. . . . Compelling [and] convincing." --Los Angeles Times Book Review "Digs relentlessly into the buried secrets of Japan's past . . . brilliantly translated into the latest vernacular." --Pico Iyer, Time

Haruki Murakami was born in Kyoto in 1949 and now lives near Tokyo. The most recent of his many honors is the Yomiuri Literary Prize, whose previous recipients include Yukio Mishima, Kenzaburo Oe, and Kobo Abe. He is the author of the novels Dance, Dance, Dance, Hard-Boiled Wonderland and the End of the World, and A Wild Sheep Chase, and of The Elephant Vanishes, a collection of stories. His latest novel, South of the Border, West of the Sun, will be published by Knopf in 1999. His work has been translated into more than fifty languages.
If the item details above aren’t accurate or complete, we want to know about it. Report incorrect product info.