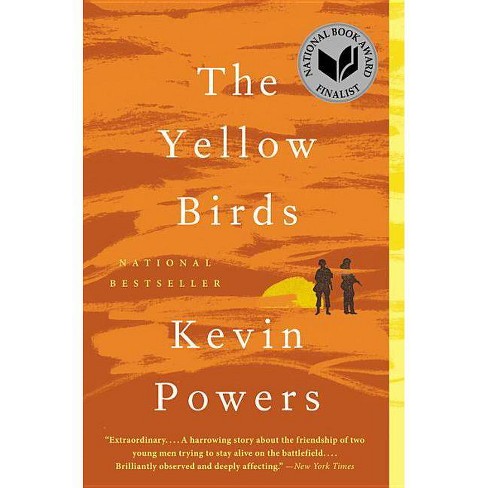 A novel written by a veteran of the war in Iraq, "The Yellow Birds" is the harrowing story of two young soldiers trying to stay alive. In Iraq, 21-year old Private Bartle and 18-year-old Private Murphy cling to life as their platoon launches a bloody battle for the city. The two have been dropped into a war neither is prepared for.

Finalist for the National Book Award, The Yellow Birds is the harrowing story of two young soldiers trying to stay alive in Iraq. The war tried to kill us in the spring. So begins this powerful account of friendship and loss. In Al Tafar, Iraq, twenty-one-year old Private Bartle and eighteen-year-old Private Murphy cling to life as their platoon launches a bloody battle for the city. Bound together since basic training when Bartle makes a promise to bring Murphy safely home, the two have been dropped into a war neither is prepared for. In the endless days that follow, the two young soldiers do everything to protect each other from the forces that press in on every side: the insurgents, physical fatigue, and the mental stress that comes from constant danger. As reality begins to blur into a hazy nightmare, Murphy becomes increasingly unmoored from the world around him and Bartle takes actions he could never have imagined. With profound emotional insight, especially into the effects of a hidden war on mothers and families at home, The Yellow Birds is a groundbreaking novel that is destined to become a classic.

The Yellow Birds is harrowing, inexplicably beautiful, and utterly, urgently necessary.--Ann Patchett A novel about the poetry and the pity of war...Powers writes with a rawness that brings the sights and smells as well as the trauma and decay of war home to the reader.--Kirkus A remarkable first novel...The Yellow Birds is brilliantly observed and deeply affecting: at once a freshly imagined bildungsroman about a soldier's coming of age, a harrowing story about the friendship of two young men trying to stay alive on the battlefield in Iraq, and a philosophical parable about the loss of innocence and the uses of memory...Extraordinary.--Michiko Kakutani, The New York Times Compelling, brilliantly written, and heart-breakingly true, The Yellow Birds belongs in the same category as Tim O'Brien's The Things They Carried and Norman Mailer's The Naked and the Dead. Thus far the definitive novel of our long wars in the Middle East; this book is certain to be read and taught for generations to come.--Philipp Meyer, author of American Rust Kevin Powers has delivered an exceptional novel from the war in Iraq, written in clean, evocative prose, lyric and graphic, in assured rhythms, a story for today and tomorrow and the next.--Daniel Woodrell Kevin Powers' The Yellow Birds is written with an intensity which is deeply compelling; every moment, every memory, every object, every move, are conjured up with a fierce and exact concentration and sense of truth.--Colm Toibin Powers has created a powerful work of art that captures the complexity and life altering realities of combat service. This book will endure. Read it and then put it way up on that high rare shelf alongside Ernest Hemingway and Tim O'Brien.--Anthony Swofford Reading The Yellow Birds I became certain that I was in the presence of a text that will win plaudits, become a classic, and hold future narratives of the war to a higher standard....a superb literary achievement.--Chris Cleave The All Quiet on the Western Front of America's Arab wars.--Tom Wolfe This is a novel I've been waiting for. The Yellow Birds is born from experience and rendered with compassion and intelligence.--Alice Sebold This moving debut from Powers (a former Army machine gunner) is a study of combat, guilt, and friendship forged under fire....Powers's style and story are haunting.--Publisher's Weekly, starred review Thoughtful and analytical, the novel resonates as an accurate and deeply felt portrayal of the effects of post-combat syndrome as experienced by soldiers in the disorienting war in Iraq. --Library Journal, starred review We haven't just been waiting for a great novel to come out of the Iraq War, our 21st century Vietnam; we have also been waiting for something more important, a work of art that illuminates our flawed and complex and striving humanity behind all such wars. At last we have both in Kevin Powers' The Yellow Birds.--Robert Olen Butler

Kevin Powers is the author of The Yellow Birds, which won the PEN/Hemingway Award, the Guardian First Book Award, and was a National Book Award Finalist, as well as Letter Composed During a Lull in the Fighting, a collection of poetry. He was born and raised in Richmond, Virginia, graduated from Virginia Commonwealth University, and holds an MFA from the University of Texas at Austin, where he was a Michener Fellow in Poetry. He served in the US Army in 2004 and 2005 in Iraq, where he was deployed as a machine gunner in Mosul and Tal Afar.
If the item details above aren’t accurate or complete, we want to know about it. Report incorrect product info.