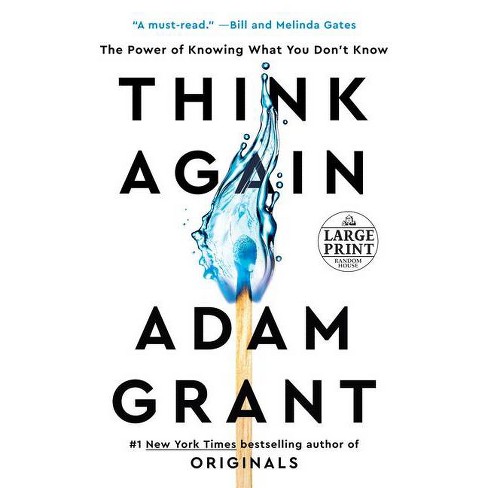 "The bestselling author of Give and Take and Originals examines the critical art of rethinking: learning to question your beliefs and to know what you don't know, which can position you for success at work and happiness at home. The difficulty of rethinking our assumptions is surprisingly common--maybe even fundamentally human. Our ways of thinking become habits that we don't bother to question, and mental laziness leads us to prefer the ease of old routines to the difficulty of new ones. We fail to update the beliefs we formed in the past for the challenges we face in the present. But in a rapidly changing world, we need to spend as much time rethinking as we do thinking. Think Again is a book about the benefit of doubt, and about how we can get better at embracing the unknown and the joy of being wrong. Evidence has shown that creative geniuses are not attached to one identity but constantly willing to rethink their stances, that leaders who admit they don't know something and seek critical feedback lead more productive and innovative teams, and that our greatest presidents have been open to updating their views. The new science of intellectual humility shows that as a mindset and a skillset, rethinking can be taught, and Grant explains how to develop the necessary qualities. The first section of the book explores why we struggle to think again and how we can improve individually, and argues that such engines of success as "grit" can actually be counterproductive; the second section discusses how we can help others think again through the skill of "argument literacy"; and the third looks at how institutions like schools, business, and governments fall short in building cultures that encourage rethinking. In the end, it's intellectual humility that makes it possible for us to stop denying our weaknesses so that we can start improving ourselves"--

#1 New York Times Bestseller "THIS. This is the right book for right now. Yes, learning requires focus. But, unlearning and relearning requires much more--it requires choosing courage over comfort. In Think Again, Adam Grant weaves together research and storytelling to help us build the intellectual and emotional muscle we need to stay curious enough about the world to actually change it. I've never felt so hopeful about what I don't know."
--Brené Brown, Ph.D., #1 New York Times bestselling author of Dare to Lead The bestselling author of Give and Take and Originals examines the critical art of rethinking: learning to question your opinions and open other people's minds, which can position you for excellence at work and wisdom in life Intelligence is usually seen as the ability to think and learn, but in a rapidly changing world, there's another set of cognitive skills that might matter more: the ability to rethink and unlearn. In our daily lives, too many of us favor the comfort of conviction over the discomfort of doubt. We listen to opinions that make us feel good, instead of ideas that make us think hard. We see disagreement as a threat to our egos, rather than an opportunity to learn. We surround ourselves with people who agree with our conclusions, when we should be gravitating toward those who challenge our thought process. The result is that our beliefs get brittle long before our bones. We think too much like preachers defending our sacred beliefs, prosecutors proving the other side wrong, and politicians campaigning for approval--and too little like scientists searching for truth. Intelligence is no cure, and it can even be a curse: being good at thinking can make us worse at rethinking. The brighter we are, the blinder to our own limitations we can become. Organizational psychologist Adam Grant is an expert on opening other people's minds--and our own. As Wharton's top-rated professor and the bestselling author of Originals and Give and Take, he makes it one of his guiding principles to argue like he's right but listen like he's wrong. With bold ideas and rigorous evidence, he investigates how we can embrace the joy of being wrong, bring nuance to charged conversations, and build schools, workplaces, and communities of lifelong learners. You'll learn how an international debate champion wins arguments, a Black musician persuades white supremacists to abandon hate, a vaccine whisperer convinces concerned parents to immunize their children, and Adam has coaxed Yankees fans to root for the Red Sox. Think Again reveals that we don't have to believe everything we think or internalize everything we feel. It's an invitation to let go of views that are no longer serving us well and prize mental flexibility over foolish consistency. If knowledge is power, knowing what we don't know is wisdom.

Adam Grant is an organizational psychologist at Wharton, where he has been the top-rated professor for seven straight years. He is one of TED's most popular speakers, his books have sold millions of copies, his talks have been viewed more than 25 million times, and his podcast WorkLife with Adam Grant has topped the charts. His pioneering research has inspired people to rethink fundamental assumptions about motivation, generosity, and creativity. He has been recognized as one of the world's ten most influential management thinkers and Fortune's 40 Under 40, and has received distinguished scientific achievement awards from the American Psychological Association and the National Science Foundation. Adam received his B.A. from Harvard and his Ph.D. from the University of Michigan, and he is a former Junior Olympic springboard diver. He lives in Philadelphia with his wife and their three children.
If the item details above aren’t accurate or complete, we want to know about it. Report incorrect product info.