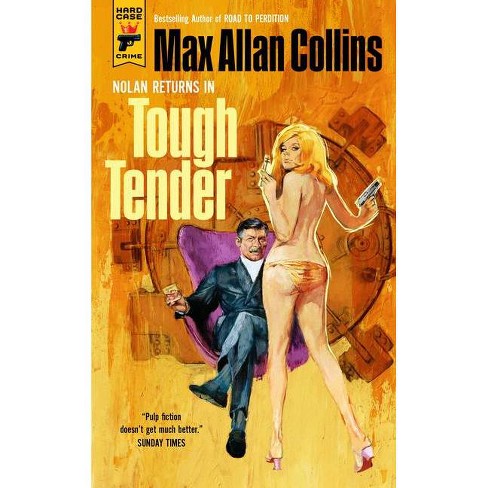 Has Nolan met his match? MWA Grandmaster Max Allan Collins' veteran thief faces off against a cold-blooded femme fatale in this double-length adventure originally published as two complete novels and unavailable in stores for three decades. "Pulp fiction doesn't get much better."
Sunday Times SOMETIMES YOU BURY THE PAST. SOMETIMES IT BURIES YOU. Every professional thief knows you never return to the scene of a crime. But what if you're forced to? In this intense heist story - appearing in bookstores for the first time in three decades - MWA Grandmaster Max Allan Collins brings veteran thief Nolan and his young partner in crime Jon back to rob the same bank they targeted in their debut novel, TWO FOR THE MONEY, at the behest of an embezzling executive and a femme fatale with dollar signs where her soul should be. And those aren't the only figures resurfacing from the past either - the ruthless Comfort clan is back to even old scores, and some members of the Outfit are packing bullets with Nolan's name on them. With all these forces marshalled against him, can even the toughest professional hardcase come out on top?

Collins really outdoes himself with Julie, surely one of the most memorable femme fatales in hard-boiled fiction (everything she touches turns to dead).
-Booklist Max Allan Collins' novels are a joy to read, and the current boon of reprints are a must-have for collectors and crime lovers alike. -- Cinema Sentries Praise for SKIM DEEP:

A racy, action-packed heist thriller -- a movie on the page. -- The Crime Review A fun, fast-paced pulpy ride. -- Crime Fiction Lover Praise for TWO FOR THE MONEY: An old-school pulpy pleasure, but with plenty of meat on its bones. - Booklist Praise for MAX ALLAN COLLINS: Max Allan Collins is the closest thing we have to a 21st century Mickey Spillane.--ThisWeek (Ohio) Collins' witty, hardboiled prose would make Raymond Chandler proud.--Entertainment Weekly

Max Allan Collins was hailed in 2004 by Publisher's Weekly as a new breed of writer. A frequent Mystery Writers of America nominee in both fiction and non-fiction categories, he has earned an unprecedented eighteen Private Eye Writers of America nominations, winning for his Nathan Heller novels, True Detective (1983) and Stolen Away (1991). In 2002, his graphic novel Road to Perdition was adapted into an Academy-Award winning film, starring Tom Hanks, Paul Newman, Jude Law and Daniel Craig. He lived in Iowa, USA.
If the item details above aren’t accurate or complete, we want to know about it. Report incorrect product info.