Two for Me, One for You - by Jorg Muhle (Hardcover) 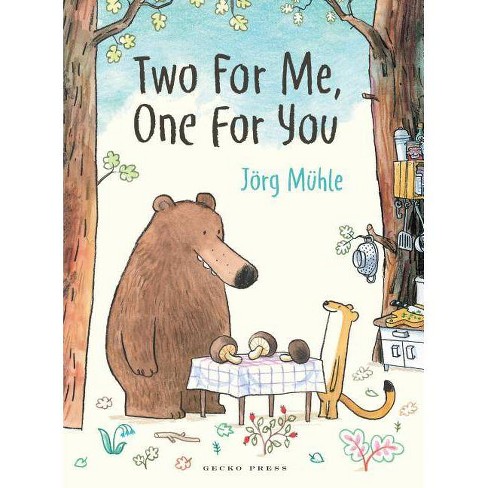 "Bear finds three tasty mushrooms on her way home through the woods. Her friend Weasel cooks them up in the frying pan. But the friends have a problem: how to share three between two?"--Provided by publisher.

Bear finds three tasty mushrooms on her way home through the woods. Her friend Weasel cooks them up in the frying pan. But the friends have a problem: how to share three between two?

Bear and Weasel each come up with one argument after another for why they should have more: I found them! I cooked them. I'm bigger. I'm still growing.... Until the fox comes around the corner and snatches a mushroom.

That solved the problem. They eat the two mushrooms and it's time for dessert. Here comes Weasel with the scrumptious wild strawberries, three of them to share...

A brown bear finds some mushrooms in the forest and is excited to share them with her friend Weasel. After Weasel cleans, seasons, and cooks the food, the two sit down to eat their meal. The problem becomes obvious: there are two friends and three mushrooms. They each have a potentially convincing argument that the other just doesn't buy--Bear is big so she needs more to eat while Weasel is small and requires more food in order to grow. A wily fox saunters by and swiftly resolves the argument and the standoff causes Bear and Weasel to unite against the interloper. All seems to be well again between the friends until Weasel offers Bear dessert, which brings the tale to the ultimate 'Uh-oh' moment. Charming illustrations on white backgrounds reveal Weasel's open air yet cozy hoe as well as other forest residents, two of whom are quietly reading books. VERDICT Children will clearly understand and sympathize with the friends' humorous conundrum. A delightful look at sharing and the problems that can result.--School Library Journal

Bear and Weasel learn a powerful lesson in sharing.

Walking through the woods, Bear finds three mushrooms, which she brings home for dinner. Weasel cooks them to perfection, with salt and pepper and 'a little parsley.' At the table, Bear takes two mushrooms for herself and gives one to Weasel. 'That's fair, ' she says. 'I'm big. I need to eat a lot.' Weasel disagrees; he's small and is still growing. This small spat, well, mushrooms into a full-blown fight. Bear points out that she found the mushrooms, and Weasel counters that he cooked them, and to perfection. But it was Bear's recipe, and she likes mushrooms more than Weasel, who is so hungry his stomach is grumbling. Bear says that her stomach is grumbling, too. But Weasel said it first. And Bear said that she wanted the extra mushroom first. Finally, Weasel declares that they aren't friends anymore. He stabs the third mushroom with a fork, lifts it over his head, and...a fox snatches it right off the fork and eats it. There's a moment of mutual shock and anger at the fox, but then Bear and Weasel sit down and wish each other 'bon appetit.' For dessert...three juicy strawberries. Mühle's storytelling has a fine sense of comic pacing, and his cartoons are simple but effective, uncluttered and full of white space, creating cozy domesticity in the forest.

Two hungry friends find themselves at loggerheads in this fablelike story about fairness. When Bear finds three forest mushrooms, Weasel cooks them up ('with a little parsley') in a well-equipped forest home. But when Bear dishes up, she calls dibs on the third mushroom: 'That's fair. I'm big, so I need to eat a lot, ' Bear says. 'I'm small, and I still have to grow, ' Weasel counters. As both friends make their cases ('I found the mushrooms'; 'I... simmered them in the heavy pan. With parsley!'), reasonable debate soon escalates into full-blown argument. Just when it seems they're at an impasse, a sly passerby swipes the extra portion, uniting the two against a shared enemy: 'The cheek of it, ' they holler, 'totally unfair!' In colored pencil and wash, Mühle crafts homey forest scenes that are one of the book's delights: tree branches serve as hooks, the kitchen bursts with pleasing jars, and Weasel sits in what appears to be a Stokke Tripp Trapp chair. A final spread features Weasel pulling out a bowl with three strawberries, leaving the reader to guess whether the friends will find new ways to argue over dessert. Sharing is well-trodden territory, but Mühle's take is full of woodsy charm.--Publishers Weekly

Bear Snores on ( Classic Board Books) by Karma Wilson

Masters of the Universe Mad Libs - by Tristan Roarke (Paperback)

A Book about Bupkes - by Leslie Kimmelman

A Perfect Wonderful Day with Friends - by Philip Waechter (Hardcover)