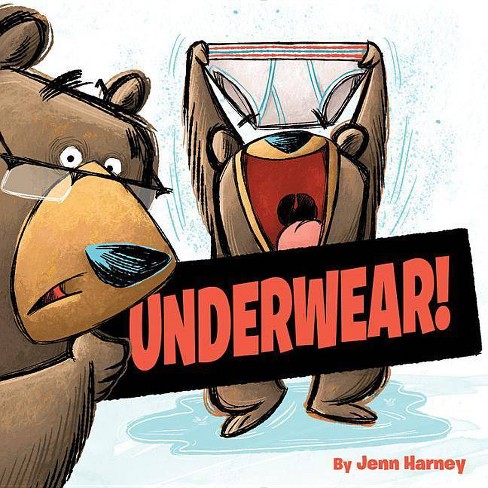 Getting his rambunctious "bare" cub into his underwear after bath time is hard enough to make a tired bear dad pull out his hair in this simple silly rhyming romp. Full color.

Bare bear! Stop right there! Underwear!
Under where? So begins the dialogue between a tired bear dad and a rambunctious bear cub who would rather play with his tighty whities than get into bed. Underwear makes great hair. It can even turn one into a superber, or a goggle-wearing swimming bear. But beware of a big scare! Rhymes, homonyms, and conjunctions abound in this book that could be used to teach reading, but its primary purpose is to make bedtime fun.

*"The cub's unbridled enthusiasm and vibrant imagination will keep kids in stitches . . . Facial features and body language are spot-on, and the rollicking rhymes are the icing on the cake. This will be a riotous hit wherever it's shared . . ."--Kirkus Reviews (starred review)

Jenn Harney is the author-illustrator of Underwear! and Swim Swim Sink. She has also illustrated Wanda Seasongood and the Mostly True Secret as well as the Hazy Bloom chapter book series by Jennifer Hamburg and the picture books How to Become a Knight (in Ten Easy Lessons) by Todd Tarpley and Never Trumpet with a Crumpet by Amy Gibson. Jenn lives in Cleveland, Ohio, with her husband, her daughter, a corgi named Steve, and the ghost of the oldest living goldfish in North America. Follow her on Twitter @jennharknee.
If the item details above aren’t accurate or complete, we want to know about it. Report incorrect product info.