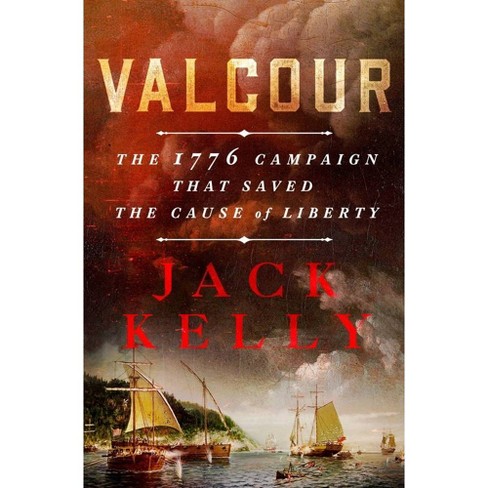 "The wild and suspenseful story of one of the most crucial and least known campaigns of the Revolutionary War when America's scrappy navy took on the full might of Britain's sea power."--Publisher's description.

Vividly written... In novelistic prose, Kelly conveys the starkness of close-quarter naval warfare. --The Wall Street Journal Few know of the valor and courage of Benedict Arnold... With such a dramatic main character, the story of the Battle of Valcour is finally seen as one of the most exciting and important of the American Revolution. --Tom Clavin author of Dodge City During the summer of 1776, a British incursion from Canada loomed. In response, citizen soldiers of the newly independent nation mounted a heroic defense. Patriots constructed a small fleet of gunboats on Lake Champlain in northern New York and confronted the Royal Navy in a desperate three-day battle near Valcour Island. Their effort surprised the arrogant British and forced the enemy to call off their invasion. Jack Kelly's Valcour is a story of people. The northern campaign of 1776 was led by the underrated general Philip Schuyler (Hamilton's father-in-law), the ambitious former British officer Horatio Gates, and the notorious Benedict Arnold. An experienced sea captain, Arnold devised a brilliant strategy that confounded his slow-witted opponents. America's independence hung in the balance during 1776. Patriots endured one defeat after another. But two events turned the tide: Washington's bold attack on Trenton and the equally audacious fight at Valcour Island. Together, they stunned the enemy and helped preserve the cause of liberty.

A delight to read. It will be of interest to general readers as well as to those devoted to war histories and biographies. --Sea History

"Draws out the uncertainty of the contest until the reader is waiting as anxiously as Arnold and his men for the battle finally to be joined. Highly readable" --Military History Quarterly "Engaging...successfully puts the reader in the shoes of the men who fought at Valcour." --Journal of the American Revolution Kelly adeptly describes the lake battles and offers plenty of insight into the principal combatants. --Booklist Stirring accounts of heroism on both sides of the conflict. --Publisher's Weekly A boon for fans of Revolutionary-era military history. --Kirkus Jack Kelly's latest history has done [much] for Benedict Arnold's reputation...one can not help but admire Arnold's energy and determination. --What Would The Founders Think This is historical writing at its best. --Terry Golway, author of Washington's General "Vivid... Kelly does us all a service by giving this crucial but oft-overlooked story a just telling." --James C. Rentfrow, Ph.D., author of Home Squadron Must reading for everyone interested in how a critical military campaign and pivotal battle on Lake Champlain set the stage for American victory in the War for Independence. Beautifully written, Valcour deserves and will command a wide readership. Highly recommended. --James Kirby Martin, author of the award-winning Benedict Arnold, Revolutionary Hero

Jack Kelly is an award-winning author and historian. His books include Band of Giants: The Amateur Soldiers Who Won America's Independence, which received the DAR History Medal. He is also the author of The Edge of Anarchy, Heaven's Ditch, and Gunpowder and is a New York Foundation for the Arts fellow in Nonfiction Literature. Kelly has appeared on The History Channel, National Public Radio, and C-Span. He lives in New York's Hudson Valley.
If the item details above aren’t accurate or complete, we want to know about it. Report incorrect product info.