Violet Made of Thorns - by Gina Chen (Hardcover) 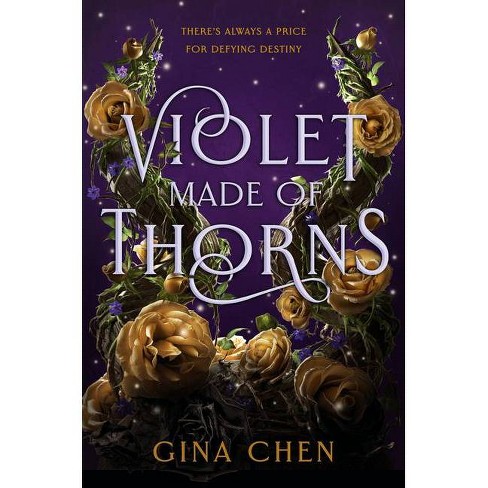 A darkly enchanting fantasy debut about a morally gray witch, a cursed prince, and a prophecy that ignites their fate-twisted destinies--perfect for fans of The Cruel Prince and Serpent & Dove. Violet is a prophet and a liar, influencing the royal court with her cleverly phrased--and not always true--divinations. Honesty is for suckers, like the oh-so-not charming Prince Cyrus, who plans to strip Violet of her official role once he's crowned at the end of the summer--unless Violet does something about it. But when the king asks her to falsely prophesy Cyrus's love story for an upcoming ball, Violet awakens a dreaded curse, one that will end in either damnation or salvation for the kingdom--all depending on the prince's choice of future bride. Violet faces her own choice: Seize an opportunity to gain control of her own destiny, no matter the cost, or give in to the ill-fated attraction that's growing between her and Cyrus. Violet's wits may protect her in the cutthroat court, but they can't change her fate. And as the boundary between hatred and love grows ever thinner with the prince, Violet must untangle a wicked web of deceit in order to save herself and the kingdom--or doom them all.

A self-taught artist with a degree in Computer Science, Gina Chen generates creative nonsense in all forms of media and always has a project stewing. She has particular fondness for fairy tales, demon tales, romantic comedies, and quiz shows. Currently, she resides in Southern California, where the sun is as plentiful as its tea shops. Violet Made of Thorns is her debut novel.
If the item details above aren’t accurate or complete, we want to know about it. Report incorrect product info.