We All Fall Down - (River City Duology) by Rose Szabo (Hardcover) 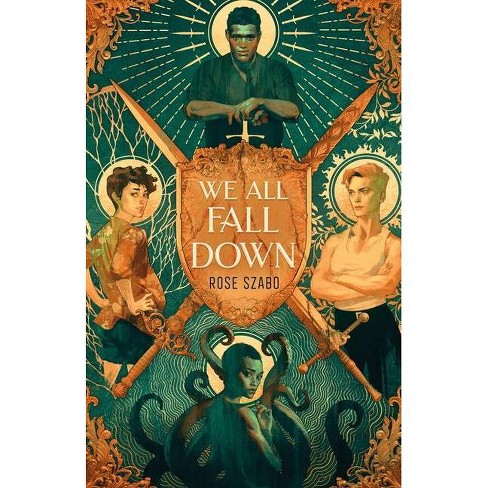 In River City, where magic used to thrive and is now fading, four young queer people, unaware they have been selected to play in an age-old drama reviving the flow of magic through their world, are brought into each other's orbits as they uncover a deeper magical conspiracy.

The first book in a dark fantasy YA duology by the author of What Big Teeth, about the power and danger of stories and the untold costs of keeping magic alive, perfect for fans of Aiden Thomas and Marie Rutkoski.

In River City, where magic used to thrive and is now fading, the witches who once ruled the city along with their powerful King have become all but obsolete. The city's crumbling government is now controlled primarily by the new university and teaching hospital, which has grown to take over half of the city. Moving between the decaying Old City and the ruthless New, four young queer people struggle with the daily hazards of life--work, school, dodging ruthless cops and unscrupulous scientists--not realizing that they have been selected to play in an age-old drama that revives the flow of magic through their world. When a mysterious death rocks their fragile peace, the four are brought into each other's orbits as they uncover a deeper magical conspiracy. Devastating, gorgeous, and utterly unique, We All Fall Down examines the complex network of pain created by power differentials, even between people who love each other--and how it is possible to be queer and turn out just fine.

Praise for What Big Teeth:

A Strand YA Book of the Month

With a layered mystery, a haunting setting, and thrilling tension, What Big Teeth has an otherness to it that pulls you in and forces you to keep reading. --Tricia Levenseller, Publisher's Weekly-bestselling author of The Shadows Between Us Deliciously gothic and wonderfully creepy. --The Bulletin of the Center for Children's Books, STARRED REVIEW

... one part haunting mystery, one part dark fantasy ... This darkly thrilling gothic fantasy will appeal to fans of Karen McManus and Maggie Stiefvater alike. --School Library Journal A tale so gorgeously twisty, it'll turn you inside out. --Tor.com Gazes into [the] darkness to face the monster that dwells within. --NPR Books A complete ghostly chill that deserves ten stars. --The Nerd Daily Has bite--and will leave you feeling dazed. -- Forever YA A hauntingly thrilling read. --The Lineup A fascinating debut. --PopSugar [An] inventive concept. --Den of Geek Not your typical YA fantasy. --Culturess

Rose Szabo is the author of What Big Teeth and We All Fall Down (River City duology #1). A nonbinary writer from Richmond, VA, they live with an assortment of people and animals. They have an MA in English from the University of Maine and an MFA in creative writing from VCU. roseszabo.com Twitter @Rose_Szabo_
If the item details above aren’t accurate or complete, we want to know about it. Report incorrect product info.