Where Butterflies Fill the Sky - by Zahra Marwan (Hardcover) 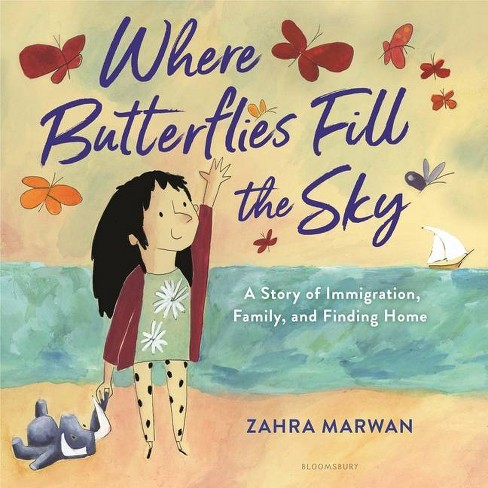 An evocative picture book debut that tells the true story of the author's immigration from Kuwait to the United States.

An evocative picture book debut that tells the true story of the author's immigration from Kuwait to the United States.

Zahra lives in a beautiful place where the desert reaches all the way to the sea and one hundred butterflies always fill the sky. When Baba and Mama tell her that their family is no longer welcome here and they must leave, Zahra wonders if she will ever feel at home again--and what about the people she will leave behind? But when she and her family arrive in a new desert, she's surprised to find magic all around her. Home might not be as far away as she thought it would be. With spare, moving text and vivid artwork, Zahra Marwan tells the true story of her and her family's immigration from Kuwait, where they were considered stateless, to New Mexico, where together they made a new home.

"The interplay of simple, literal prose and complex, figurative illustration here lifts this sensitive and useful picture book on immigration into an inviting exploration of how experiences are transformed by time and memory." --BCCB, starred review

"Every page includes tiny imaginative details to enchant attentive readers: flowers, birds, fish, prayer beads, oud, guitarrón, and much more. This sensitive and beautifully depicted story should touch all young readers, regardless of family background or origin." --School Library Journal, starred review "A colorful, captivating odyssey for younger readers." --Shelf Awareness "A nuanced representation of belonging and citizenship that will ring true for many whose sense of home has never been absolute." --The Horn Book "The affectionate text is accompanied by traditionally created watercolor illustrations, the palette conveying the feel and beauty of the places featured in the book. A valuable insight into the world of immigration and displacement." --Kirkus Reviews "Zahra Marwan's stylistic ink and watercolor illustrations are magnificent, incorporating motifs, memories, and colors of both cultures throughout . . . This book seamlessly connects the two cultures, enhancing this simply told story rich in the concepts of immigration, family, and home." --School Library Connection

Zahra Marwan grew up in two deserts -- one close to the sea in Kuwait, the other close to the mountains in New Mexico. She is a fine artist who exhibits extensively and has won international awards and fellowships, including the SCBWI Mentorship Award. She studied the visual arts in France and currently lives in the Barelas neighborhood of Albuquerque, New Mexico.
zahramarwan.com
@two_desert