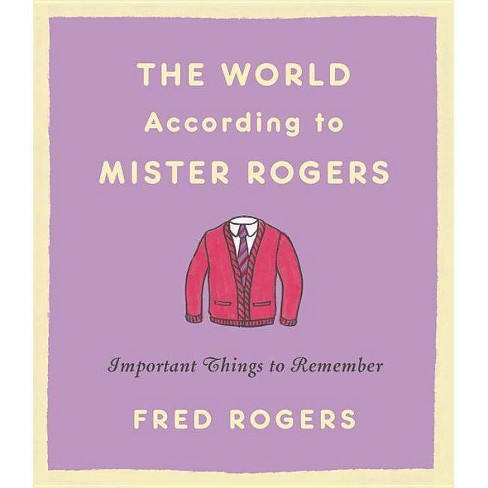 "Distills the legacy and singular worldview of [the public television personality], ... [including] stories, anecdotes, and insights--with sections devoted to love, friendship, respect, individuality, and honesty"--Publisher marketing.

A timeless collection of wisdom on love, friendship, respect, individuality, and honesty from the beloved PBS series Mister Rogers' Neighborhood. There are few personalities who evoke such universal feelings of warmth as Fred Rogers. An enduring presence in American homes for over 30 years, his plainspoken wisdom continues to guide and comfort many. The World According to Mister Rogers distills the legacy and singular worldview of this beloved American figure. An inspiring collection of stories, anecdotes, and insights -- with sections devoted to love, friendship, respect, individuality, and honesty, The World According to Mister Rogers reminds us that there is much more in life that unites us than divides us. Culled from Fred Rogers' speeches, program transcripts, books, letters, and interviews, along with some of his never-before-published writings, The World According to Mister Rogers is a testament to the legacy of a man who served and continues to serve as a role model to millions.

Known as "America's Favorite Neighbor," Fred Rogers dedicated his life to serving children through public television as creator, composer, and host of Mister Rogers' Neighborhood. He studied at the University of Pittsburgh Graduate School of Child Development and was ordained a Presbyterian minister, with the unique charge of working with children and families through television. Fred Rogers' relentless commitment to all that is best in people led to an astonishing array of honors, from induction into the Television Hall of Fame to the Presidential Medal of Freedom. Fred Rogers passed away in February 2003. Mister Rogers' Neighborhood first debuted in 1968 on PBS and for over forty years has defined television at its finest.
If the item details above aren’t accurate or complete, we want to know about it.

This product is featured in recent Target Finds stories

Life's Journeys According to Mister Rogers - by Fred Rogers (Hardcover)

Many Ways to Say I Love You - by Fred Rogers (Hardcover)

The Simple Faith of Mister Rogers - by Amy Hollingsworth (Paperback)

My Body - by Emily Ratajkowski

Life's Journeys According to Mister Rogers - by Fred Rogers (Hardcover)

Beautiful Day in the Neighborhood : The Poetry of Mister Rogers - by Fred Rogers (Hardcover)