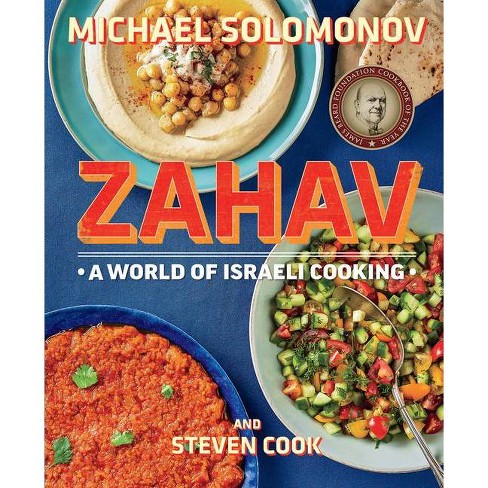 $25.99
undefined out of 5 stars with 0 reviews
be the first!be the first! ratings
Help us improve this page

James Beard Book of the Year and Best International Cookbook (2016) "After stints working with chef Marc Vetri in Philadelphia and as head chef at Marigold Kitchen, Solomonov developed a passion for Israeli cooking and his desire to show the full breadth of the cuisine began to take shape; he started his own restaurant, Zahav, in Philadelphia in 2008. Six years later, he won the James Beard award for best chef in the Mid-Atlantic region. Solomonov shares his story as well as his wide-ranging approach to Israeli cuisine in this impressive collection of recipes that are sure to challenge readers' preconceptions. In addition to kibbe, kugel, latke, and rugelach, Solomonov offers chicken albondigas, the Spanish tapas standard; cashew baklava cigars; and the Chocolate Almond Situation, his riff on the flourless chocolate cake. To these stunningly simple dishes he adds deliciously decadent fare such as duck and foie gras kebabs, and beluga lentil soup with marrow bones. Solomonov isn't one for showmanship (or waste--the juices from his Israeli salad of cucumber, tomato, parsley and lemon are added to gin to create an unusual martini), and virtually all the book's recipes are within the reach of novice cooks. The reader's biggest challenge will likely be mastering the ubiquitous tehina sauce used as a foundation for hummus and as an accent in countless dishes. Readers with an adventurous palate and an open mind will be richly rewarded by this terrific debut."
--Publisher's Weekly, starred review "Zahav's modern approach to Israeli cooking makes for the kind of book that will redefine the conversation around Middle Eastern cuisine in America." --EATER.com "Each of Michael Solomonov's soulful recipes feels created by someone impassioned by one of the world's most exciting cuisines - a master of his craft. I'm smitten!" -- Gail Simmons, TV Host, author, Talking With My Mouth Full "Cooking is how Michael found himself, changed his life, and then the world around him. Michael writes that 'nothing in my life happened the way it was supposed to.' He means life in its beauty and its awful brutality. I think that his life and most importantly this book, is beshert, 'meant to be.' I believe his Zahav will be one of the most cherished books in years, with staggeringly delicious recipes from one of the brightest lights in our culinary world. I believe this book will be beshert for you too." -- Andrew Zimmern, chef, anthropologist, global thought leader "Zahav is the most honest chef's cookbook I have read in a long time. Mike's soulful depiction of his life delivers the same heart and intelligence that emanates from his restaurant. Zahav is essential reading for anyone who wants to make the food of Israel --or Philadelphia-- today." -- Joan Nathan, author, The Foods of Israel Today "Zahav has become a staple of my Philly restaurant experience, but staples only hold pages down. Here at last are pages --and pages -- of Michael Solomonov's thinking on food, community, and the recipes that get me back to Zahav every time." -- Questlove "I'm excited to have Zahav, a compendium of Chef Solomonov's recipes, so I can recreate them." -- David Lebovitz, author, My Paris Kitchen "The great thing about Michael Solomonov is that he simply cooks from his heart. With Zahav, he has developed perhaps one of the most innovative and thoughtful restaurants in America. After years of asking him for recipes, I'm relieved to finally have his book to answer all of my questions!" -- Chef Marc Vetri "The humanity of it, that's the thing. The presence. The joy. The actual connection that's forged between the person cooking and the person eating. In Zahav, the recipes don't end when the food is done cooking -- there are instructions for bringing things to the table, for how to serve, for how to eat, for how to share, for how to finish...The result is cooking that feels right for both a world-class restaurant and a home kitchen, food that's both an education and a pleasure." --EATER.com
If the item details above aren’t accurate or complete, we want to know about it. Report incorrect product info.