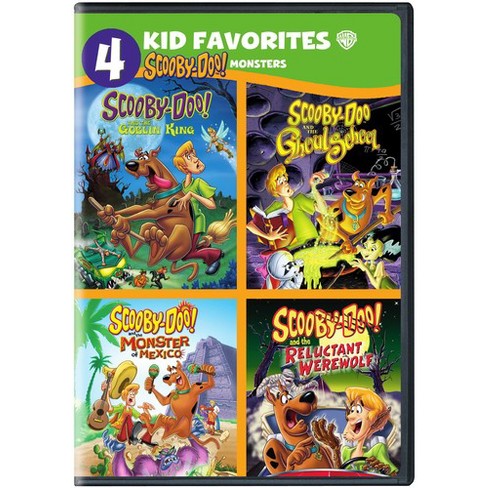 Scooby-Doo and the Goblin King: What a predicament! The Amazing Krudsky, whose carnival tricks are anything but, steals the light magic fromPrincess Fairy Willow and it's up to Scooby-Doo and Shaggy to stop him or everyone will be turned into horrible Halloween monsters! Our heroes board the Grim Reaper Railroad bound for the fantastic world of Halloween Land to retrieve the powerful Goblin Scepter from the Goblin King before Krudsky can. Along the way, the Mystery Inc. crew encounters the infamous Headless Horseman, the helpful Jack O'Lantern and a frisky broomstick that takes them on the ride of their afterlife.

Scooby-Doo and the Ghoul School: Scooby-Doo and Shaggy learn there are things even scarier than homework in this feature-length field trip into mystery and mayhem! The academic adventure begins when the boys sign on as gym teachers at Miss Grimwood's School for Ghouls - only to discover the pupils are (zoinks!) daughters of the world's most frightfully famous monsters! But when the girl-ghouls are kidnapped by the evil Revolta and her spider-bat flunkies, our heroes spring into action torescue their fiendish little friends in spectacular Scooby-Doo style!

Scooby-Doo! and the Monster of Mexico: The gang heads south of the border for some well-earned rest and relaxation, but there's trouble in the town ofVeracruz, where tourists are being frightened away by a terrifying creature who is ten feet tall, with huge greenglowing eyes! When Scooby-Doo and the gang discover their friend may have to sell his hotel because of the creature,things get even more mysterious.

Scooby-Doo and the Reluctant Werewolf: Gear up for Scooby-Doo's most monstrous adventure ever! After Count Dracula transforms Shaggy into a fuzz-faced werewolf, there's only one way he'll change him back. Scooby-Doo and Shaggy must win a creepy cross-country race against the frightfully funny cars driven by a hot-rodding horde of sinister celebrity monsters!