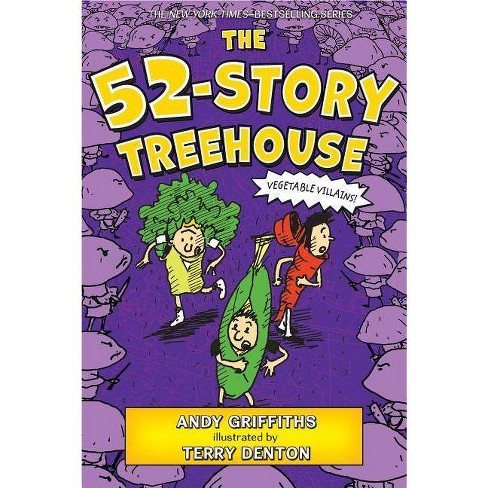 New York Times bestselling author Andy Griffiths invites readers to come hang out with him and his friend Terry in their 52-Story Treehouse--the fourth book in the illustrated middle-grade series filled with Andy and Terry's signature slapstick humor!

Andy and Terry live in a 52-Story treehouse. (It used to be a 39-story treehouse, but they keep expanding.) It has a chainsaw-juggling level, a make-your-own-pizza parlor, a rocket-powered carrot-launcher, a life-size snakes and ladders game, a remembering booth, a Ninja Snail Training Academy and a high-tech detective agency, with all the latest high-tech detective technology, including the Disguise-o-Matic 5000!

Something that is sure to come in handy as they try to solve the mystery of: What happened to Mr. Big Nose? After all, it's hard to turn in your next book when your publisher has vanished! Join New York Times-bestselling author Andy Griffiths and illustrator Terry Denton on another wild storytelling adventure in a series Publishers Weekly described as Anarchic absurdity at its best. Welcome to The 52-Story Treehouse...What are you waiting for? Come on up! This title has Common Core connections.

The 26-Story Treehouse:
Twice the treehouse, twice the fun? You bet.... Denton's furiously scrawled line drawings milk the silly, gross-out gags for everything they're worth. Kids should be flipping pages faster than a pair of inflatable underpants can skyrocket the young heroes to safety. --Publishers Weekly, starred review

This zany sequel, as much cartoon illustration as text, is an almost nonstop adventure. --Booklist The 13-Story Treehouse:
Anarchic absurdity at its best.... Denton's manic cartooning captures every twist and turn in hilarious detail. --Publishers Weekly, starred review Will appeal to fans of Jeff Kinney and Dav Pilkey...The wonderfully random slapstick humor is tailor-made for reluctant readers... A treat for all. --Booklist

Andy Griffiths is the New York Times-bestselling author of the Treehouse series, Killer Koalas From Outer Space, The Big Fat Cow That Goes Kapow, The Cat on the Mat Is Flat, and The Day My Butt Went Psycho! In 2007, he became the first Australian author to win six children's choice awards in one year for Just Shocking! He is passionate about inspiring a love of books in his young readers, and works as an ambassador for the Indigenous Literacy Project, which provides books and literacy resources to remote indigenous communities around Australia. Andy is a big fan of Dr. Seuss and of cauliflower. He lives in Melbourne, Australia, and is Australia's most popular children's writer.