The 39-story Treehouse ( The Treehouse Books) (Paperback) by Any Griffiths 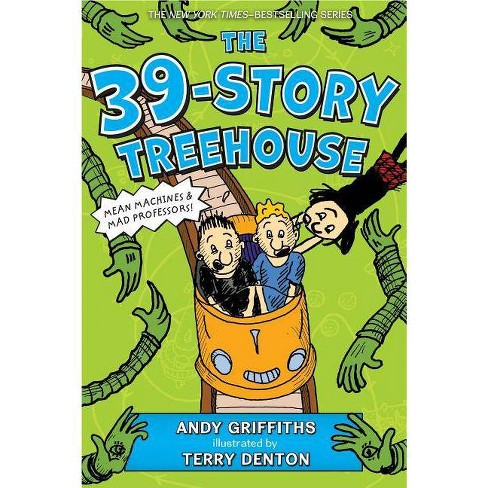 "Andy and Terry live in a 39-story treehouse, with the world's highet trampoline, a chocolate waterfall, a baby-dinosaur petting zoo, an active (non-erupting) volcano, a boxing elephant called The Trunkinator, the world's scariest roller coaster, and a level that is so new and so secret that Terry hasn't even finished it yet!"--Back cover.

Andy and Terry are once again inviting readers to come hang out with them in their astonishing 39-story treehouse (it used to be 13 stories, then 26 stories, but they keep expanding). And this year they will have even more time to jump on the world's highest trampoline, toast marshmallows in an active volcano, swim in the chocolate waterfall, pet baby dinosaurs, and go head-to-trunk with the Trunkinator, since Terry has created the greatest invention that he--or anyone else--has ever invented . . . a Once-upon-a-time machine that will write and illustrate their entire book for them!

Join New York Times-bestselling author Andy Griffiths and illustrator Terry Denton on another wild storytelling adventure in a series Publishers Weekly described as Anarchic absurdity at its best. Welcome to The 39-Story Treehouse...What are you waiting for? Come on up! This title has Common Core connections.

Praise for The 26-Story Treehouse:

Wildly humorous without being smart-alecky or sarcastic, this is a top choice for middle-grade readers. --School Library Journal This zany sequel, as much cartoon illustration as text, is an almost nonstop adventure involving self-inflating underpants, fish with bad breath, sharks with zippered bellies, 78 flavors of ice cream, and several disasters, before its explosive finish. Mr. Big Nose, the publisher, is impatient for more. Can the 52-story model be far behind? --Booklist Twice the treehouse, twice the fun? You bet. Griffiths and Denton follow the uproarious The 13-Story Treehouse with another cartoon-laden carnival of slapstick and self-referential humor--this time, with pirates....Whether it's Jill and her menagerie of animals stacked precariously on a tiny iceberg or a giant, smelly fish head orbiting the Earth (it's an important plot point), Denton's furiously scrawled line drawings milk the silly, gross-out gags for everything they're worth. Kids should be flipping pages faster than a pair of inflatable underpants can skyrocket the young heroes to safety (it's also an important plot point). Best of all, Terry and Andy leave readers with a blueprint for a 39-story sequel. --Publishers Weekly, starred review

Praise for The 13-Story Treehouse: A series starter that will appeal to fans of Jeff Kinney and Dav Pilkey . . . A treat for all . . . And guess what? It makes for good tree house reading. --Booklist Fans of Jeff Kinney's Diary of a Wimpy Kid and Lincoln Peirce's Big Nate series will be drawn to this book, while parents will enjoy the absence of snarky humor. --School Library Journal Longtime collaborators Griffiths and Denton (Killer Koalas from Outer Space) get metafictional in their latest book (first published in Australia), and the result is anarchic absurdity at its best. Young buddies Andy and Terry live together in the sort of tree house that kids dream about, complete with bowling alley, shark tank, vines to swing from, and underground laboratory. --Publishers Weekly, starred review
Boys in particular will like the burping contests, gross creatures, and ridiculous choices that Terry and Andy make throughout the book. And as if killer mermaids are not enough, there are sea monkeys. And a giant gorilla. And a giant banana. And the return of the catnary. See? Silly, ridiculous fun. Kids will love it. --Kris Sauer, Children's Literature

Create a massive, magical treehouse with every possible amusement ... Then add two creative and attention-challenged boys who live in the treehouse and can't seem to get their work done. It's a recipe for reading fun--whipped up masterfully by author Andy Griffiths and illustrator Terry Denton. - Bookpage

New York Times-bestselling author Andy Griffiths, who wrote the Treehouse series, What Body Part Is That?, Killer Koalas From Outer Space, The Big Fat Cow that Goes Kapow, The Cat on the Mat Is Flat, and The Day My Butt Went Psycho!, is at his best in these wild storytelling adventures, perfect for readers of all ages.

Terry Denton has worked with Andy on many books, including the 13-Story Treehouse series and Killer Koalas From Outer Space. He lives in Australia with his wife and three kids.
If the item details above aren’t accurate or complete, we want to know about it. Report incorrect product info.