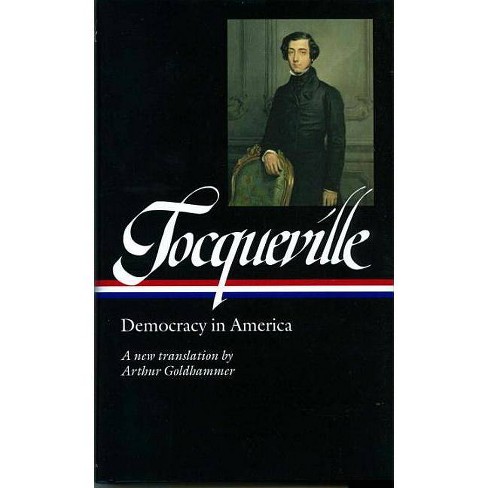 "Democracy in America" is "the" classic analysis of America's unique political character, quoted heavily by politicians and perennially popping up on history professors' reading lists. The book's enduring appeal lies in the prophetic voice of de Tocqueville (1805-1859), a French aristocrat who visited the United States in 1831.

An exclusive new translation of the most perceptive and influential book ever written about American politics and society--"the bible on democracy" (The Texas Observer) Alexis de Tocqueville, a young aristocratic French lawyer, came to the United States in 1831 to study its penitentiary systems. His nine-month visit and subsequent reading and reflection resulted in this landmark masterpiece of political observation and analysis. In Democracy in America, Tocqueville vividly describes the unprecedented social equality he found in America and explores its implications for European society in the emerging modern era. His book provides enduring insight into the political consequences of widespread property ownership, the potential dangers to liberty inherent in majority rule, the vital role of religion in American life, and the importance of civil institutions in an individualistic culture dominated by the pursuit of material self-interest. He also probes the deep differences between the free and slave states, writing prophetically of racism, bigotry, and prejudice in the United States. Brought to life by Arthur Goldhammer's clear, fluid, and vigorous translation, this volume of Democracy in America is the first to fully capture Tocqueville's achievements both as an accomplished literary stylist and as a profound political thinker.

Winner of the 2004 Translation Prize awarded by the French-American Foundation "This new translation by Goldhammer gets to the heart of Tocqueville's words." -- Library Journal It's hard to think of a work that has so influenced our understanding of the United States as this--still the most authoritative, reflective set of observations about American institutions and the American character ever written. That its author was a Frenchman, and an aristocrat at that, and that he was balanced and penetrating has often occasioned rueful surprise. However, de Tocqueville's distance from his subject is precisely what lends his observations such continuing currency. A few decades ago, for instance, we read Tocqueville for his prediction that Russia and the United States would one day contest for pre-eminence. Now, we ought to read him (Iraqis and Afghans should, too) for his classic analyses of the link between political parties and free associations and for his reflections on such matters as religion and public life, and self-interest properly understood. But many solid translations exist. Why another? Because the Library of America would be incomplete without this canonical work of history and sociology. And this translation by Goldhammer, the dean of American translators from the French, accomplishes what it's hard to believe possible: it lends to this unalterably grave work some zest. Never slipping into slang, it gives a colloquial cast, fitting for our time, to a work normally rendered only with high solemnity. The Library of America claims that its editions will stay in print forever. This one's likely to stand that test. -- Publishers Weekly

Arthur Goldhammer is the award-winning translator of more than eighty French works in history, literature, art history, classical studies, philosophy, psychology, and social science. Olivier Zunz is Commonwealth Professor of History at the University of Virginia, and the author of numerous books including Why the American Century? He has also co-edited The Tocqueville Reader (Blackwell) and is president of the Tocqueville Society.
If the item details above aren’t accurate or complete, we want to know about it. Report incorrect product info.