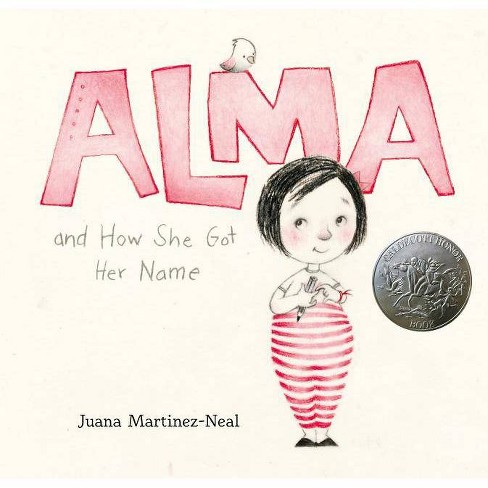 What's in a name? For one little girl, her very long name tells the vibrant story of where she came from. As she hears the story, Alma Sofia Esperanza Jose Pura Candela starts to think her name might be a perfect fit after all--and realizes that she will one day have her own story to tell. Full color. 1/8.

A 2019 Caldecott Honor Book What's in a name? For one little girl, her very long name tells the vibrant story of where she came from -- and who she may one day be. If you ask her, Alma Sofia Esperanza José Pura Candela has way too many names: six! How did such a small person wind up with such a large name? Alma turns to Daddy for an answer and learns of Sofia, the grandmother who loved books and flowers; Esperanza, the great-grandmother who longed to travel; José, the grandfather who was an artist; and other namesakes, too. As she hears the story of her name, Alma starts to think it might be a perfect fit after all -- and realizes that she will one day have her own story to tell. In her author-illustrator debut, Juana Martinez-Neal opens a treasure box of discovery for children who may be curious about their own origin stories or names.

Martinez-Neal brings her gentle story to life through beautiful graphite and colored pencil artwork, set against cream-colored backgrounds. Soft blue and red details pop against the charcoal scenes, which perfectly reflect the snapshots of Alma's family. While Alma feels enriched by learning her family's history, she is also empowered by the knowledge that she will give her name, Alma, its own story.
--Booklist (starred review) Martinez-Neal's first outing as author is a winner--her velvety and largely monochromatic pencil drawings, punctuated with cherry red, teem with emotional intimacy. It's an origin story that envelops readers like a hug.
--Publishers Weekly (starred review) The softly colored images and curvilinear shapes that embrace the figures evoke a sense of warmth and affection. At the story's end, the only tale readers have not heard is Alma's. "You will make your own story," states her father. A beautifully illustrated, tender story to be shared with all children, sure to evoke conversations about their names.
--School Library Journal (starred review) Mostly monochromatic against a cream background, the illustrations--print transfers with graphite and colored pencils--are delightful, capturing the distinctive essences of Alma's many namesakes...A celebration of identity, family and belonging.
--Kirkus Reviews Throughout, grayscale print transfer illustrations have a soft visual texture, and subtle colored-pencil highlights in pinks and blues enliven each spread. The pictures end up stealing the show in their depiction of the sweet closeness between Alma and her father. They also convey a subtle, supernatural connection between Alma and her ancestors, whose images in the family photos make eye contact with her outside of her father's awareness.
--The Horn Book As artist, her mostly black-and-white graphite and colored pencil drawings with splashes of red (suggesting now) and blue (capturing then) provide an additional, enhancing narrative: the family's Peruvian roots, Alma's avian and floral interests, her bilingual drawings, her historically inspired style sense, even a peek at Esperanza's worldly treasures...Names are so much more than a collection of letters and sounds, Martinez-Neal reminds. The book's final words, "What story would you like to tell?" become an invitation for readers to share and claim each of their own, distinctive stories, histories and identities.
--Shelf Awareness for Readers Every piece of Alma's name, she discovers, comes to her from someone in her family, and, as she and her father talk, Alma feels a new sense of connection...Touching on cultural themes central to the recent Pixar movie "Coco," this is a tender outing for children ages 4-8.
--The Wall Street Journal A great book for introducing family history and the importance of our place within it.
--Story Monsters Ink

Juana Martinez-Neal is the Peruvian-born daughter and granddaughter of painters. Her debut as an author-illustrator, Alma and How She Got Her Name, was awarded a Caldecott Honor and was published in Spanish as Alma y cómo obtuvo su nombre. She also illustrated La Princesa and the Pea by Susan Middleton Elya, for which she won a Pura Belpré Illustrator Award, Babymoon by Hayley Barrett, Swashby and the Sea by Beth Ferry, and Fry Bread: A Native American Family Story by Kevin Noble Maillard, which won a Robert F. Sibert Medal. Juana Martinez-Neal lives in Connecticut with her family. Visit her online at www.juanamartinezneal.com.
If the item details above aren’t accurate or complete, we want to know about it. Report incorrect product info.