Apollyon - (Left Behind) by Tim LaHaye & Jerry B Jenkins (Paperback) 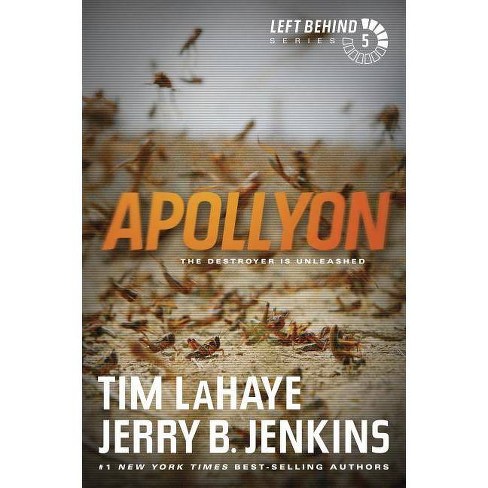 The Tribulation Force ventures to Jerusalem for the Meeting of the Witnesses, where thousands defy the Antichrist to sit Tsion Ben-Judah. The fifth Trumpet Judgment is so horrifying that men try to kill themselves but are not allowed to die. This is the most shocking portrayal yet in the continuing drama of those left behind.

Book 5 in the 12-book series that has sold over 63 million copies!

Apollyon: The Destroyer Is Unleashed
As the world's thousands of believers gather in Jerusalem for a stadium rally, the Tribulation Force struggles with their own personal crises. Nicolae Carpathia continues his rise to power, forcing believers underground. But Nicolae isn't prepared for a plague of scorpion-like locusts tormenting his followers--with a pain so horrible that men try to kill themselves but aren't allowed to die.

"Tell me, Captain Steele. Do you still believe that a man who has been known to raise the dead could actually be the Antichrist?"

With those chilling words, Global Community leader Nicolae Carpathia prepares to unleash a new depth of evil on the world. As thousands of believers gather for a conference in the Holy Land, is Carpathia's pledge of protection evidence of his much-touted tolerance--or a lie? Pilot Rayford Steele must maintain a charade of loyalty while desperately seeking the truth about his late wife. Was Amanda truly a traitor to the Tribulation Force or the victim of a smear campaign? Meanwhile Buck Williams, now an international fugitive, risks his life to carry out the Trib Force's top-secret missions in a world rocked by demonic catastrophes.

Apollyon is #5 in the phenomenal New York Times best-selling Left Behind series that rocked the publishing world and made millions think seriously about the future and their places in it.

With special features relating to current events and end-times prophecy.
If the item details above aren’t accurate or complete, we want to know about it.

Reminders of Him - by Colleen Hoover (Paperback)

5 out of 5 stars
Catlover 2021 - 2 years ago
Apollyon (Left Behind series, book 5) was very good; but very scary. It leaves you hanging on the edge of your seat; it leaves you hanging after the last chapter is over.
Did you find this review helpful?