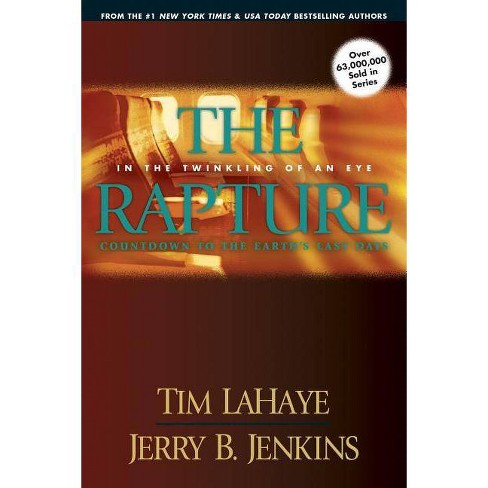 The stage is set as Nicolae Carpathia ruthlessly eliminates any obstacles in his rise to power. In the twinkling of an eye, loved ones disappear. Heaven rejoices as millions are welcomed into the unspeakable presence of God. The darkest days may lie ahead for those who have been left behind.

Book 3 of the 3-book prequel to the best-selling Christian fiction series that sold over 63 million copies!

"The Left Behind series . . . is among the best-selling fiction books of our times--right up there with Tom Clancy and Stephen King." --Time

Get a glimpse into the lives of your favorite characters before they were left behind.You will find all these answers and more in this exciting series!

The Rapture: In the Twinkling of an Eye / Countdown to Earth's Last Days
In this the final prequel to the blockbuster series, the story alternates between events on earth immediately after the Rapture and characters in heaven as they view the chaotic events on earth.

Journalist Cameron "Buck" Williams is in Israel when the Russians attack and experiences for himself the miraculous deliverance of the Holy Land. Buck cannot deny Chicago bureau chief Lucinda Washington's insistence that the event was prophesied in Scripture, though he dares not consider the personal ramifications.

Meanwhile, Nicolae Carpathia eliminates any obstacles in his path to power. As the newly appointed president of Romania, Nicolae is invited to speak before the U.N.

Without warning, millions disappear and are welcomed into the unspeakable presence of God.

And the darkest days lie ahead for those left behind.