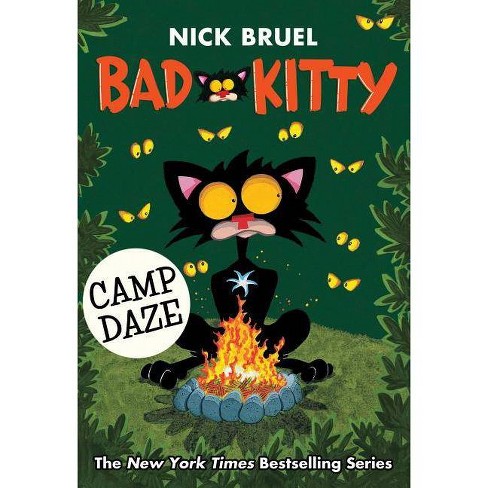 Bad Kitty is headed for a camp experience like no other in the 11th installment of Bruel's "New York Times"-bestselling series. Illustrations.

Kitty's life is really hard. Like really, REALLY hard. All she asks for is twenty-two hours a day to sleep and food to be delivered morning and night. But does she get it? No. And when Puppy and Baby get a little rambunctious during her naptime, Kitty gets bonked on the head and starts to believe she's . . . a dog.

This new dynamic freaks out Puppy, so he's sent away to Uncle Murray's Camp for Stressed-Out Dogs to relax with other canine campers. But guess who sneaks along? Still believing she's a dog, Kitty fits right in. That is until she and Uncle Murray encounter a bear, and then the feline claws come out. Nick Bruel's Bad Kitty Camp Daze is perfect for any kid with or without camping experience.

Nick Bruel is the author and illustrator of the phenomenally successful Bad Kitty series, including the 2012 and 2013 CBC Children's Choice Book Award winners Bad Kitty Meets the Baby and Bad Kitty for President. He has also written and illustrated popular picture books including Who is Melvin Bubble? and Bob and Otto. Nick lives with his wife and daughter in Westchester, New York.
If the item details above aren’t accurate or complete, we want to know about it. Report incorrect product info.