Battle for the American Mind - by Pete Hegseth & David Goodwin 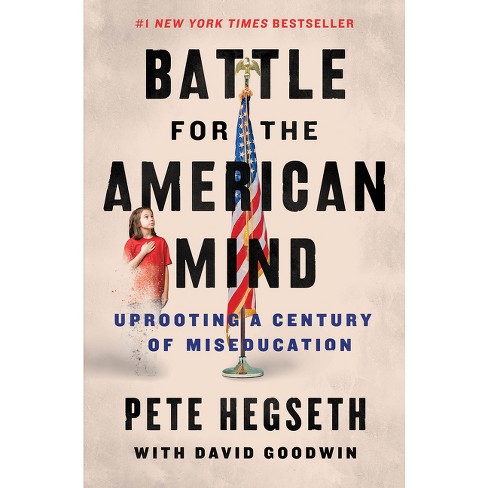 "Fox News host and New York Times bestselling author Pete Hegseth delivers his most important book yet: an excoriating examination of the state of America's broken education system that offers a helpful road map to raising children to uphold the values Americans have always treasured"--

FOX News host Pete Hegseth is back with what he says is his most important book yet: A revolutionary road map to saving our children from leftist indoctrination.

Behind a smokescreen of "preparing students for the new industrial economy," early progressives had political control in mind. America's original schools didn't just make kids memorize facts or learn skills; they taught them to think freely and arrive at wisdom. They assigned the classics, inspired love of God and country, and raised future citizens that changed the world forever.

Today, after 16,000 hours of K-12 indoctrination, our kids come out of government schools hating America. They roll their eyes at religion and disdain our history. We spend more money on education than ever, but kids can barely read and write--let alone reason with discernment. Western culture is on the ropes. Kids are bored and aimless, flailing for purpose in a system that says racial and gender identity is everything.

Battle for the American Mind is the untold story of the Progressive plan to neutralize the basis of our Republic - by removing the one ingredient that had sustained Western Civilization for thousands of years. Pete Hegseth and David Goodwin explain why, no matter what political skirmishes conservatives win, progressives are winning the war--and control the "supply lines" of future citizens. Reversing this reality will require parents to radically reorient their children's education; even most homeschooling and Christian schooling are infused with progressive assumptions. We need to recover a lost philosophy of education - grounded in virtue and excellence - that can arm future generations to fight for freedom. It's called classical Christian education. Never heard of it? You're not alone.

Battle for the American Mind is more than a book; it's a field guide for remaking school in the United States. We've ceded our kids' minds to the left for far too long--this book gives patriotic parents the ammunition to join an insurgency that gives America a fighting chance.

"Pete Hegseth brilliantly spotlights one of the most important issues facing our country: America's children and their education. By exposing the undercurrents of wayward indoctrination in American education and reorienting the reader toward classical Christian education, he provides a solution to the feeling of hopelessness so many parents experience. Pete unrolls a road map to saving America's children and providing our little ones a path to prosperity, success, and well-being." -- Kayleigh McEnany

"Forget what you thought you knew about education in America--this book will rock your consciousness. Battle for the American Mind exposes the insidious and hidden Marxist takeover of America's classrooms, and arms every citizen, parent, and grandparent with a plan to fight back. For the sake of our Republic, read Pete Hegseth's book." -- Mark Levin

"Pete Hegseth, along with David Goodwin, argues that a return to classical education alone cannot save American students from a century of ideological pollution and dumbing down of both K-12 and higher education. Instead, they envision "Christian paideia" reuniting Jerusalem with Athens and Rome, thereby restoring rational, empirical training that enhances faith and spirituality. Battle for the American Mind is cogent, occasionally polemical, and always engaging. Let us hope its passionate case for restoring morality and sanity helps to spark an American educational renaissance." -- Victor Davis Hanson

"It is time to rethink the importance of education and bring it back under the Lordship of Christ. Much of the compromise we see in the church can be traced to how we educate our children. This work pulls back the veil to reveal the sinister agenda of progressive education and prescribes a little-known antidote that will, with the grace of our Lord, have a real impact on the future of our kids." -- John MacArthur

"Pete Hegseth is a patriot, and as such he is unwilling to abandon the educational system to the predations of the militant Left. In Battle for the American Mind, Hegseth lays out the state of play: how far gone our educational system is and what we can do to take it back." -- Ben Shapiro

"If you want your civilization to continue, few things matter more than what your children learn in school. Our kids are learning to hate the society our ancestors built. Pete Hegseth has seen it, and in this book, he's got a solution." -- Tucker Carlson

"Pete is a phenomenal patriot and this book is a must-read. The education fight is the most critical in America."
-- Charlie Kirk

"Liberals have been using the education system as an indoctrination assembly line for decades. This book is an eye-opener and a must-read for any parent concerned about their children's future." -- Dan Bongino

For Such a Time as This - by Kayleigh McEnany (Hardcover)

Radio's Greatest of All Time - by Rush Limbaugh (Hardcover)

Get Out of Your Head - by Jennie Allen

In the Arena - by Pete Hegseth (Paperback)

5 out of 5 stars
Would recommend
Dollie - 7 months ago, Verified purchaser
The content was so relevant to how and why our nation is struggling. We can and need to do better as a nation and her people.
2 guests found this review helpful. Did you?