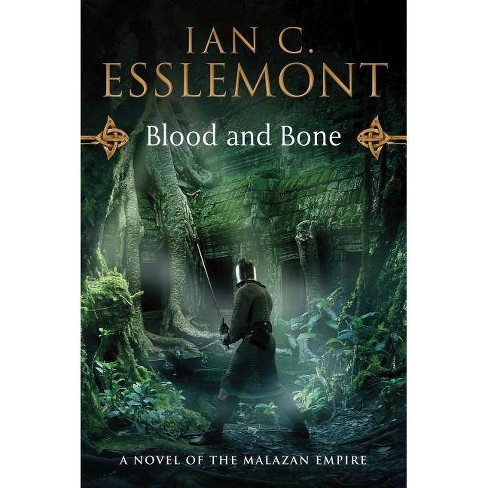 Ian Esslemont thrills again with another gripping entry into the New York Times bestselling Malazan World in Blood and Bone.

In the western sky the bright emerald banner of the Visitor descends like a portent of annihilation. On the continent of Jacuruku, the Thaumaturgs have mounted yet another expedition to tame the neighboring wild jungle. Yet this is no normal wilderness. It is called Himatan, and it is said to be half of the spirit realm and half of the earth. And it is said to be ruled by a powerful entity whom some name the Queen of Witches, and some a goddess: the ancient Ardata.

Saeng grew up knowing only the rule of the magus Thaumaturgs--but it was the voices out of that land's forgotten past that she listened to. And when her rulers mount an invasion of the neighboring jungle, those voices send her and her brother on a desperate mission. To the south, the desert tribes are united by the arrival of a foreign warleader, a veteran commander in battered ashen mail whom his men call the Grey Ghost. This warleader takes the tribes on a raid like none other, deep into the heart of Thaumaturg lands. Meanwhile word comes to K'azz, and mercenary company the Crimson Guard, of a contract in Jacuruku. And their employer...none other than Ardata herself.

Praise for Other Titles by this Author
"Return of the Crimson Guard" "Everything you expect of a Malazan story, being both epic and relevant... nail-biting and anything but obvious."" --SFFWorld"

"Stonewielder" "A terrific read... impossible to put down and highly recommended for all fans."" --FantasyHotlist"

IAN C. ESSLEMONT grew up in Winnipeg, Manitoba. He has studied archaeology and creative writing, has traveled extensively in Southeast Asia, and lived in Thailand and Japan for several years. He now lives in Alaska with his wife and children and is currently working on another novel set in the world of Malaz, a world he co-created with Steven Erikson.