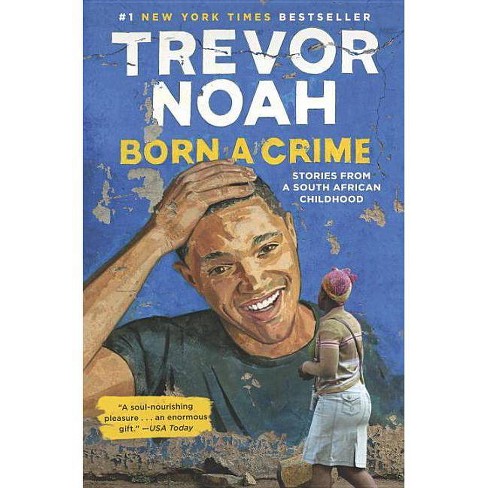 Trevor Noah is a comedian from South Africa.
If the item details above aren’t accurate or complete, we want to know about it.

Astrophysics for People in a Hurry - by Neil deGrasse Tyson (Hardcover)

Gone to the Woods - by Gary Paulsen

5 out of 5 stars
Would recommend
dcham - 3 years ago, Verified purchaser
great read; well written; funny and enlightening
2 guests found this review helpful. Did you?

5 out of 5 stars
Would recommend
Maderian - 3 years ago, Verified purchaser
This Book is absolutely one of the best Books I have read through it all Trevor has emerged as a wonderful funny and loving person
1 guest found this review helpful. Did you?

5 out of 5 stars
Would recommend
Abronxgirltoldme - 4 years ago
Absolutely awesome read. I am not a fan of autobiographies, and yet this one was delicious! I fed my mind, heart, and soul. I was expecting to hear about how he was a jokester growing up or of something...who knows. I just know I was not expecting this...this book tells of his upbringing as a colored South African with a mother who set the foundation under which he currently functions. There is telling of his hunger to survive at all stages of life in a way that is very reminiscent of American children today. Definitely worth every bit of my time. Glad I picked it up!
2 guests found this review helpful. Did you?

5 out of 5 stars
Would recommend
Celia - 4 years ago, Verified purchaser
Great book I laughed much, and being African myself, I could relate a lot to his many stories, in so many ways things
2 guests found this review helpful. Did you?

5 out of 5 stars
Would recommend
Ginny - 5 years ago, Verified purchaser
Great read ! It was so touching and I learned a lot about South Africa. I love Trevor Noah even more after reading it.
2 guests found this review helpful. Did you?

5 out of 5 stars
Would recommend
K - 5 years ago, Verified purchaser
I actually checked this book out from the Library and enjoyed it so much, I bought it for my family. If you are not a Trevor Noah fan now, his endearing and humorous tales about growing up in South Africa will spark the flame. It arrived in less than a week and now I'm third in line to reread it.
2 guests found this review helpful. Did you?

5 out of 5 stars
Would recommend
LSCM - 6 years ago, Verified purchaser
I brought this book as a gift for my daughter. She has been reading it and is enjoying it. She's been share excerts from it. She really likes Trevor Noah as well.
2 guests found this review helpful. Did you?

5 out of 5 stars
Would recommend
Sharon Evans - 6 years ago
I bought 2 of these books as gifts. I'm sure they will like it. Trevor Noah is a great entertainer/comedian
2 guests found this review helpful. Did you?

5 out of 5 stars
Would recommend
david m - 6 years ago
Awesome book so far & actually got earlier than expected
1 guest found this review helpful. Did you?

Very educational with a little humor

5 out of 5 stars
Would recommend
Bushra Kabir - 6 years ago
I love this book. I'm learning a lot about South Africa reading it but also about one of my favorite faces on TV. There is so much personality in it, all kinds of emotions including humor. Trevor Noah is a great and intelligent storyteller!
1 guest found this review helpful. Did you?